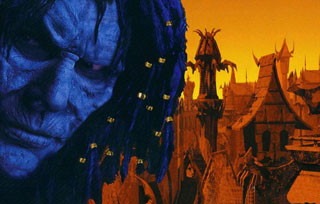 There’s a countdown timer out there that just might be pointing to a remastered version of Planescape: Torment.

Planescape: Torment is one of the most popular RPGs of all time. It carries a 91% on Metacritic, and is regularly cited as being the best RPG ever made. All that being said, it does seem strange that with all the remasters being made lately, there’s been no update to Planescape: Torment. But that could change, and it might change tomorrow.

There’s a countdown timer over on PlanEscape.com that should reach zero at 5 PM ET tomorrow, March 28. It was tweeted on Friday by the president of Beamdog, Trent Oster. Beamdog, as you’ll recall, is the studio behind Baldur’s Gate: Enhanced Edition.

I've heard a lot about planning your vacation around a hub or nexus is a good idea: https://t.co/XKTTw6vn5Z— Trent Oster (@TrentOster) March 24, 2017

Of course, the URL makes you think of Planescape, and if you examine the source code of the site, you’ll find five hex characters – 0x50 0x53 0x54 0x45 0x45 – marked as “Secret.” If you convert those to ASCII, you’ll find that it spells out PSTEE, which you could easily believe stands for Planescape: Torment Enhanced Edition.

If (or when) it turns out to be Planescape: Torment, it will be interesting to see just how Beamdog approaches the remaster. The studio hired former Bioware writer David Gaider last year, but you have to wonder if the company would be willing to risk altering Torment at all, considering how beloved the game is. If there are changes, I would expect that they might be limited to additional content, rather than making any substantive changes.

Whatever is planned, we’ll likely have a better idea of just what it is around this time tomorrow. You can check out the countdown at PlanEscape.com.

Protect Your Privacy With a 6-Pack of Webcam Covers for Just $14.99

UPDATED: Outlast 2 Cleared for Australian Release by Classification Board