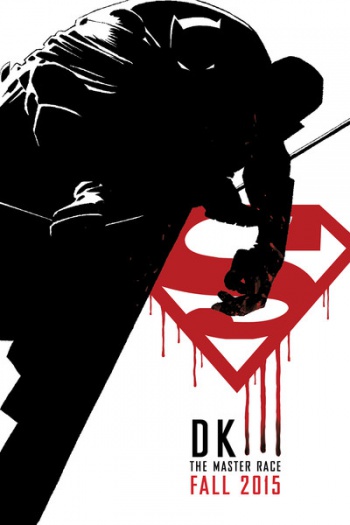 The Master Race to arrive in comic shops this Fall.

Thirty years after The Dark Knight Returns changed Batman for a generation of comic readers, Frank Miller is returning to write a third and final chapter in the saga. DC Comics has announced the impending availability of The Dark Knight III: The Master Race, which will be published as an eight-issue periodical, with twice monthly releases beginning in late Fall 2015.

Unlike The Dark Knight Returns and its 2001 follow-up, The Dark Knight Strikes Again, Miller isn’t writing this series solo. Brian Azzarello, whose work includes 100 Bullets, Wonder Woman, and the supremely creepy 2008 Joker graphic novel is also on board the project.

DC also hasn’t yet confirmed the artists for DKIII. While this doesn’t exclude the possibility that Miller is drawing the book as he has done with prior Dark Knight installments, it could also suggest that Miller might be even less involved in this particular sequel.

A lone promotional image has been released with the announcement, showing the aged Batman perched on a wire, blood dripping from the Superman emblem behind him to form the title’s roman numeral. While every Dark Knight story to date has found Batman coming into opposition with Superman, things could be exceptionally grim for the Caped Crusader now, presuming Dark Knight III picks up where its predecessor left off. The Dark Knight Strikes Again concludes with the liberation of Kandor from Braniac, freeing a whole population of Kryptonians, the presence of which could cause all manner of chaos for Earth.