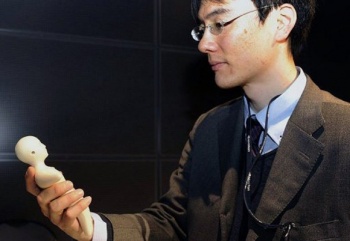 It’s person-shaped and feels like it’s made out of human skin. If it’s not the creepiest phone ever, its certainly a finalist in the running.

Every now and then, technological advances aren’t so much cool as they are just unsettling and/or creepy. Remember those Tron: Legacy action figures? Well, this latest creation might just top those when it comes to eeriness: a human-shaped mobile phone with a skin-like outer layer.

Seriously, folks, this is happening. The phone was created by Takashi Minato at the Advanced Telecommunications Research Institute International (ATR) created this phone so people could “feel closer to the person on the other end of the phone.” Apparently the research team received input on the device from Osaka University, as well as mobile phone company NTT DoCoMo and “several other unnamed institutes” (hey, I wouldn’t want to be named, either, if I was involved in a project like this).

A prototype phone has been created, which is slightly larger than the palm of the average person’s hand. Apparently, the exterior layer feels disturbingly like human skin, while a speaker unit is installed into the head of the figure. Meanwhile, a light-emitting diode is placed into the figure’s chest and will change colors based on how the phone is being used (the example cited is that the light will turn blue when in use and red while in standby mode).

According to Geek, the plan is to put the phone into production within five years after the research has been completed. Current plans apparently include additional features like image and voice recognition.

I’m not going to lie: A phone that feels like it’s made from human skin sounds kinda terrifying. I’d also rather have a phone that lets me watch movies and play games, anyway, so I think I’ll stick to my iPhone.