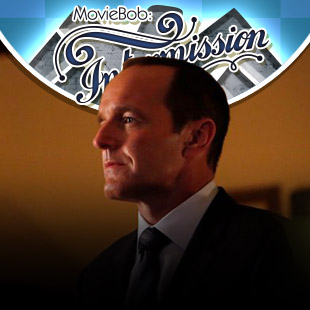 Another strong, action packed episode, though the dense myth arc development makes things slightly convoluted this week out. SPOILER WARNING is in effect.

By now it’s been effectively established that “big improvement over Season 1” is going to be a presumed automatic-compliment for any given episode of Agents of S.H.I.E.L.D Season 2; but with “A Fractured House” we can now also confirm that there’s an automatic-criticism to go with it: Uneven pacing.

While still structured around episodic scenarios (this week: HYDRA soldiers massacred attendees at a U.N. conference wearing S.H.I.E.L.D uniforms, forcing Coulson to reach out to traitorous Agent Ward’s U.S. Senator brother to diffuse the situation), the series is overwhelmingly committed to its overarching “big story” mysteries and character arcs – generally at the expense of a traditional three-act episode structure. It’s an approach that’s conducive to what they have to assume is a viewership that’ll be heavy on binge-watching, but it can be a bit jarring as a week-to-week spectacle.

In any case, along with advancing the various main story points (HYDRA vs. S.H.I.E.L.D, Talbot vs(?) Coulson, alien-writing, Skye’s dad, etc) of the season, this week’s installment was built around three primary items on the “to do” list: Introduce White Collar’s Tim DeKay (thus making Agents feel even more like a displaced USA Network series than ever) as Ward’s maybe-evil Senator brother, bring the Skye/Ward Silence of The Lambs story to a close (thank you!) and give fans a fight scene (the series’ surprising strong-suit since Season 1) featuring Agent May and both of the newcomer ass-kickers, Lance Hunter (whose real-life name, I will never tire of reminding you, is Nicholas Blood) and Agent Bobbi “Mockingbird” Morse.

And on those fronts? It basically delivered, though to varying degrees. The fight business came through the best: The choreography/stunt team on this series is really good, and I really dug the moment where seemingly-random HYDRA henchman Marco Scarlotti busts out a weapon to remind in-the-know fans that in the comics he was once one of several to use the name Whiplash. Pallicki, as before, acquits herself admirably in action (in long shots, the actress’ near-Amazonian physique and stature makes her “opponents” look cartoonishly outmatched) and the TV-ified version of the Mockingbird uniform looks as good as it’s going to get – I understand why they thought the mostly-white color scheme wouldn’t work, but I think it might’ve contrasted nice with everyone else’s getup. Still, it works.

Ward’s Hannibal Lecter routine hasn’t “worked” for me all season. The idea was solid, but going all the way with the big transparent wall and Ward free to stalk around inside the cell was a little much. It made sense for Hannibal because “caged zoo animal” was the idea: Hopkins would amble around passively… until he wasn’t, like a caged tiger. That’s never been Ward’s “thing,” and even if it were now Brett Dalton simply doesn’t have the range to pull it off. Why they didn’t just stick him in some kind of cool restraint-system is beyond me. In any case, I was glad to see it come to an end – but not as glad as I was to see it come to an end after Ward finishing off telling Skye his “new info” about her parents (specifically: The “village” her parents’ supposedly slaughtered was actually a bunch of HYDRA agents killed in self-defense, and her mother – whoever she is – is dead). I was seriously worried they’d draw that out further across the season.

The Senator Ward angle, on the other hand? More interesting than successfully-implemented, but pretty interesting all the same. The basic dynamic (both brothers claim that the other is “the real evil one,” and that the other is a dangerous psychopath) is loaded with potential, but the reveal was bound-up in a too-cute-by-half editing gimmick whereby two conversations that seemed to be happening at the same time turned out to be past/present cause and effect scenes instead. Clever, but it didn’t add much. Frankly, I was much more interested in General Talbot’s attitude change since last we met him: He doubts that the U.N. attack was really S.H.I.E.L.D right off, and shakes May’s hand at the end of a fracas.

Also of note: The burgeoning friendship(?) between Fitz and Mack continues to be an interesting side-story, particularly in the way that he confront Simmons in this episode – basically flat-out telling her that her presence isn’t helping because she makes him feel self-conscious about the man he used to be instead of figuring out how to excel at his present situation. Still not sure where they’re going with this, but if they keep it up this could turn into the most interesting relationship on the series.

Finally, as for Brian Van Holt as “Tattoo Guy” in the stinger? (The one after that terrific Age of Ultron clip? See below…

Recommendation: It feels like Agents is gearing up for “things you’ll want to know for the movies” territory, so if you’re a Marvel fan and not already onboard it’s probably time.

NEXT WEEK:
Nothing! The show is taking a week off so ABC can run a Marvel 75th Anniversary puff-piece. Agents will return on November 11th with “The Writing On The Wall,” which promises to out all of Coulson’s secret-keeping as the team hunts for a serial-killer who’s been leaving alien-writing on the bodies of his victims.