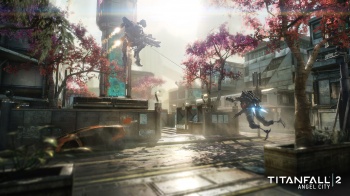 Respawn Entertainment drastically changed its DLC policy with Titanfall 2, promising to release all post-launch maps, and a lot of other content for free. The first of those maps, a remake of Titanfall 1‘s Angel City, is being prepped for launch this week as part of the “Angel City’s Most Wanted” DLC drop.

If you’re raising an eyebrow at the in-game store, Respawn explains that “In addition to the free stuff, we will be opening a store in game with the launch of DLC #1 that will allow you to purchase new skins, camo and Prime Titans if you want for a modest price. We will have no in-game currency exchange.”

In a cheeky jab at titles like Overwatch and Team Fortress 2, it says that there are “No locked loot boxes, crafting shards or pay-to-win weaponry. No RNG. If you see something you like, you buy it and that’s it.”

You can read the full details of the update, as well as the company’s plans for future updates, in this blog post.