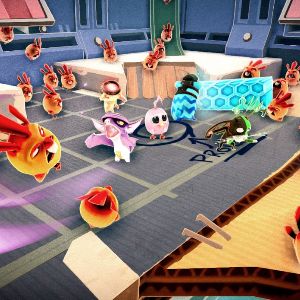 Tiny Brains tells the story – what there is of it – of four laboratory animals under the thumb of a mad Russian scientist. The titular Tiny Brains have been granted powerful mental abilities thanks to torturous experimentation, and are now charged with completing various tests and challenges. All in the name of science, of course.

A puzzle game for up to four players, Tiny Brains utilizes the unique capabilities of each of the four animals in order to present a series of environmental puzzles, all revolving around interaction with blocks, balls, and other objects. Minsc the hamster creates blocks which can be stood on, pushed, or exploded to lend height to jumps. Dax the bat creates a blast that pushes objects across the length of the screen, while Stew the rabbit pulls objects toward him in a wide cone. The final Brain, Pad the mouse, can highlight an object and then instantly swap places with it. Together, the Brains use their powers to move from test cage to test cage, do battle with other experiments, and uncover the secret of a mysterious pink chick.

Puzzles revolve around a handful of simple ideas, the most common of which is the need to move a power block from one part of a cage to a socket in another part. Things start off simply enough – use Minsc to create platforms and reach high ledges, use Pad to get objects from behind bars by swapping places with them, etcetera. As the game progresses, things naturally get a bit more involved, and the Tiny Brains will need to combine their powers. One basic example is to create a platform with Minsc, then stand on it as Dax and use the force blast to ostensibly “surf” on the block across a chasm. By the end of the adventure, some rapid-fire combinations of powers will be required, as players push, pull, and swap with things quickly in order to deal with the pitfalls, crushers, and other deadly traps.

For the most part, Tiny Brains is a clever little game, but it suffers from some messy puzzles that sometimes rely more on luck than logical thought. There are several stages where one is required to move a ball up a series of finicky slopes, constantly pushing and pulling the thing to keep it from falling down pits. The sometimes unearthly and unpredictable physics of objects, combined with the annoying cooldown requirements of abilities, can lead to a number of frustrating instances as the ball swings wildly out of control. At their worst, these sections are combined with glorified escort missions, some balls possessing health meters (for story reasons) and requiring protection from damage as well as constant babysitting to keep it from rolling into a hole somewhere. Chaotic in a bad way, I didn’t find these sections particularly fun. 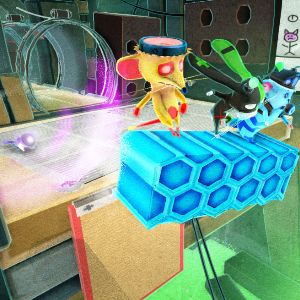 Repetition is also a problem. Despite being only a couple hours long at best, Tiny Brains recycles its concepts to a tedious degree. If you perform one action to solve a puzzle, you can guarantee you’ll be needing to do it again and again. Likewise, wave-based combat sections, where you’re require to push, pull, and squash incoming chicken mutants, feel drawn-out and overused, as do the repeated instances of protecting the pink chick by pulling and pushing it away from intermittently flaming hotplates.

Cooperative play mitigates some of the boredom, and it really is the recommended way to enjoy it. Solo players can switch between the four Brains instantly, but when you’re playing with a full roster, each one plays their one role to the fullest. Communication is a must, however, and it’s hardly surprising the game is so keen to promote its local co-op mode. Playing online without talking can be an exercise in frustration, though you can enjoy limited non-verbal communication by using the PS4 touchpad to point at specific locations – a feature that saved me from screaming at the screen at one point.

Tiny Brains feels rough around the edges with some half-baked physics puzzles, and the repetition is a drag, but if you have three local friends who are into puzzle games, I dare say you’ll get your money’s worth. It really does suffer as a solo experience, however, and the online co-op will require headset use in order to not be irritating.

As well as the short story mode, the game can be replayed in a few flavors – Tiny Troll adds friendly fire to the co-op, allowing players to batter each other for a laugh, while Jules mode is a single-player run with a new character possessing all four powers, the catch being that if you die once, you’re dead for good. There’s also a timed challenge mode for a number of puzzles, a multiplayer Soccer game, and things to collect. Tiny Brains does an admirable job of squeezing as much mileage as it can out of its humble offering, though the offering still comes off as humble.

Visually, this is a bright and colorful game, which I always feel we can use more of. The character designs are excellent, and the environments as comically cruel. The framerate, however, is a little offputting, and I don’t care much for the grain filter splashed over the action. Still, the voice acting is delightful, and the song at the end (something I should be tired of “wacky” digital games doing) is adorable.

Bottom Line: Tiny Brains is short, messy, and relies heavily on reusing its ideas, but it’s also a funny and clever little game that can delight as much as dismay.

Recommendation: If you intend to play alone, you can safely skip this. If, however, you have three friends who are willing to indulge, you’ll get what you paid for.

Dead State Zombie Demo Coming To Eat You In January

Voice Actor of Sonic the Hedgehog‘s Tails Dies at 48