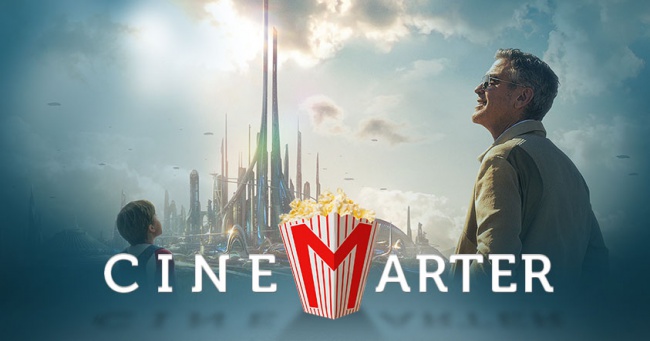 Despite often feeling more like a lecture than anything else, Brad Bird‘s Tomorrowland does nonetheless still entertain. It’s often incredibly problematic, but it sweeps you up in its visuals and world-building, even if it’s more likely to leave you wanting more of the futuristic world of the title than you’d hope going in. Yes, Tomorrowland is a wonder to behold, but we only get to see glimpses of it. Hopefully, at some point in the future, we’ll get a film that more thoroughly explores it.

The movie, meanwhile, sees an optimistic teenager, Casey (Britt Robertson), hand-picked by an A.I., Athena (Raffey Cassidy), to help save planet Earth. With the help of a man who had given up all hope, Frank (George Clooney), they will head to Tomorrowland, a futuristic city located in a different dimension that the world’s best and brightest created centuries earlier, in hopes of stopping the seemingly inevitable demise. Yes, you read that right; Tomorrowland is located in a different dimension, has a ton of futuristic technology, and we only get to see it in all its glory for maybe ten minutes – and that might be generous. Oh, and it’s run by a character played by Hugh Laurie, which is all kinds of awesome. 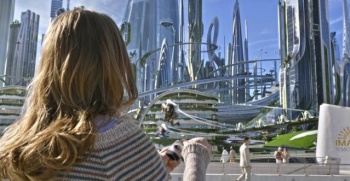 Most of the film, instead, takes place on Earth, as our characters try to figure out how to actually get to Tomorrowland, all while being chased down by evil A.I. who don’t want them to achieve this goal. Why? It’s ultimately irrelevant. We need a villain. Eventually, another villain is introduced simply so that he can deliver dialogue directly to the camera concerning the way we’re destroying our planet – and despite all the warnings we’ve been given, we’re not doing anything to fix that fact. Yes, it’s that kind of movie.

It’s the preachiness that drags Tomorrowland down. When it’s about these characters being chased, or even about trying to save the world through positive and creative thinking – no, really – it actually works quite well. Many of the Earth scenes function like a kid-friendly version of The Terminator, and that’s swell. There’s even a Rock ‘Em Sock ‘Em Robot fight thrown in! But then the message has to come to the forefront, not content to simply exist, noticeable but in the background. The film wants to make a point. It sacrifices fun to lecture the audience, many of whom will be children – this is a Disney movie, after all.

Tomorrowland winds up much more like a lecture than a special effects-driven adventure movie.

It’s a little difficult to feel as inspired as Tomorrowland wishes when part of its message relies on elitism, but let’s roll with that. What’s more difficult to digest is an awkward romance between George Clooney’s character and the one played by 12-year-old Raffey Cassidy – again: no, really – or how the most characterization our protagonist, Casey, gets is being called The Special. And, of course, how little of Tomorrowland we actually get to experience in the movie called “Tomorrowland.” Maybe that’s coming in the prequel/sequel. Even with mixed feelings on this outing, I’d be on-board for another journey.

The visuals alone can entertain for hours, even though we only get to see the gorgeous special effects for fleeting moments. The whole idea behind Tomorrowland is fascinating, and there are so many ways the film could have been taken. The potential is immense, and yet the filmmakers use all of this material to lecture the audience. It’s a disappointment. For the first two-thirds of the film, it looks like we’re building up to something great, and then we basically just get a couple of speeches, some mediocre action, and a predictable conclusion – and then we come away with more questions than answers.

Even though the characters are pretty shallow – they have one or two defining traits, if that – the actors are solid. There might not be a more reliable actor than George Clooney out there; his star-power and screen-presence can hold our attention like few others. Britt Robertson, in the lead role, is solid but unspectacular. Raffey Cassidy is wonderful as a mini-Terminator with a lot more personality. If they want to replace Arnold Schwarzenegger with her after Genisys, I honestly don’t think I’d have a problem with that. It’s really too bad that the actors’ talents aren’t being used on better characters.

A problematic movie from start to finish, Tomorrowland winds up much more like a lecture than a special effects-driven sci-fi adventure movie. It doesn’t focus as much on the futuristic city of Tomorrowland as you’d expect, and it gets very preachy toward its finale. Its good actors are wasted on shallow characters. Despite all of this, it moves at a breezy pace, is moderately funny, and a well-meaning message – even if it’s not delivered in the most effective way. 130 minutes fly by, even if they don’t all hold up on further inspection and will have you come away with more questions than answers.

Bottom Line: Tomorrowland showcases some creativity from its filmmakers, but is too often weighed down by the preachy method with which it delivers its message to be considered an outright success.

Recommendation: Tomorrowland‘s visuals alone almost make it worth seeing, but if you’re not a fan of being lectured at the movies, don’t bother with it.

Five Years of This S**T