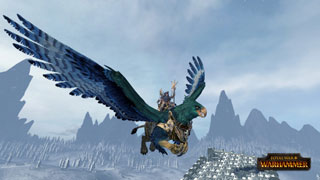 Even if you don’t buy the new Total War: Warhammer, you’ll be seeing some new content when it launches this week.

This week marks the launch of the Beastman DLC for Total War: Warhammer, which will bring the race of half-man, half-beast mutants to the game. But if you’re not picking up the DLC, you can still count on seeing some new content in the game this week.

Alongside the new DLC, Creative Assembly will release a free content update that will bring, among other things, the Amber Wizard hero to the game. The Amber Wizard is an Empire unit, but can use Lore of Beasts like the Beastmen do. It is also the only unit that has access to the new Amber Griffin mount.

Lore of Beasts allows the Amber Wizard (and the Beastmen, of course) to use spells, including these:

With the Beastmen faction being added to the game, the patch will also include a multiplayer rebalance, as well as numerous other updates, such as the ability to customize Lords and Heroes. There will also be four new multiplayer maps.

You can see all the info on Total War: Warhammer Update 2 on the Total War Wiki

500 GB and 1TB Xbox One S Models Available in August

Get a Lifetime Subscription to PureVPN for Only $99