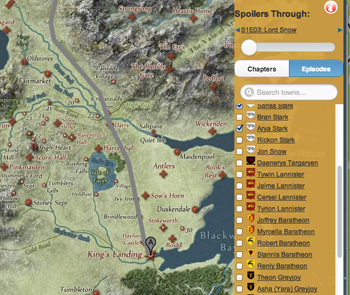 You can map the movements of various Game of Thrones characters while keeping your eyes free from spoilers.

Epic stories like George R. R. Martin’s Game of Thrones take place over continents with various characters traveling from one place to the next. A skilled fan has mapped the journeys of Game of Thrones characters and presented the information in the style of an interactive map.

The map’s creator, “theMountainGoat,” has been working on an animated map of the series for years, and this one is incredibly detailed, allowing you to track the movements of any and all listed characters, and check their pages on the Wiki of Ice and Fire wikia site.

Those fearing spoilers will be able to control where each character’s path stops in relation to a timeline of the story. Select the chapter or episode you’re up to date on, and you won’t see where that character is (and whether they’re dead or alive) past that point.

theMountainGoat created a speculative world map based on a Westeros map a member of the Cartographer’s Guild made and another speculative map including Essos, Sothoryos, Ibben, and the Summer Isles drawn by others. Using this information, theMountainGoat updated their map and used images from Google Earth and a stock photo. The scale of the map is based on the length of the Wall as the books state it is 300 miles long. theMountainGoat also notes that the maps drawn in the books are not drawn to scale as Martin prefers the maps to follow the style of medieval cartography.

theMountainGoat specifies that this map is not considered a part of the canon work and is largely speculative. Regardless, it’s an impressive amount of work.