A series of trademarks and discoveries lend evidence to rumors that Bungie is working on an MMO called Destiny.

Bungie, the studio that created Halo, is currently hard at work developing a mysterious new project for Activision. Though no official information has been released on the project, rumors call it an action-oriented MMO codenamed or titled Destiny. Due to a newly uncovered trademark, image, and a Bungie staffer T-shirt, these rumors are looking like they may have some truth behind them.

In October 2010, Bungie teased that it’d like to make a game that was “always there for you,” hinting at an MMO. Bungie lead network engineer David Aldridge was believed to have confirmed that Bungie was working on an MMO at GDC 2011, but the company later said he was just kidding around. The MMO rumor began as a completely unsubstantiated report from an unknown source claiming to be an ex-Bungie employee that called Bungie’s project Destiny and said it would be “World of Warcraft in space.”

Recently, website Halo.Bungie.Org discovered a supposed dummy corporation called Podophobia Entertainment formed by Bungie president Harold Ryan and composer Martin O’Donnell located at the former spot of Bungie’s headquarters. A trademark search revealed that Podophobia filed to protect the name “Destiny” in reference to “computer game software,” along with a logo (see above).

A NeoGAF user curious about a symbol worn by Bungie executive producer Jonty Barnes provides a link between Bungie and the logo. As seen below, Barnes’ shirt features the image of the logo on his left shoulder. Another shirt-related connection that nobody may have noticed yet involves the other image on the front, which appears to be a wing with a “7” in the center. Bungie also filed a bunch of trademarks for names such as “Seven Seraphs,” referring to seven archangels (which have wings). 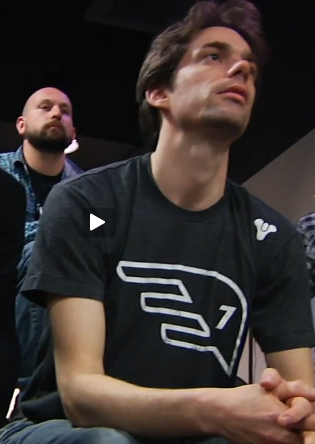 Altogether, the logo, trademarks, and dummy corporation begin to piece together a puzzle that could display the picture of a new, space angel-related MMO in development over at Bungie called Destiny. Either that, or Barnes was wearing an old T-shirt. Whatever Bungie has under wraps, we sadly won’t see it at E3 2011, because Bungie is taking a pass this year.

The Week in Review: Zombies, Orphans, and Racist Transformers