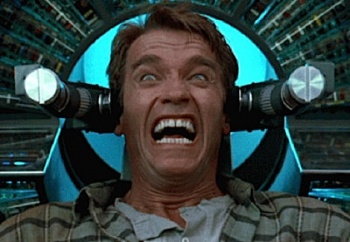 Colin Farrel will play the part that Schwarzenegger played more than twenty years ago, that of Douglas Quaid, a man who is led to believe that he is nothing more than an average Joe. In the original movie, which is very loosely based on the Phillip K. Dick novella, We Can Remember It For You Wholesale, Quaid is a construction worker who dreamed of going to Mars.

Unable to afford the actual trip, he visits a company called “Rekall,” which offers the next best thing: the memories of a tailor-made trip to the red planet. Unfortunately, the memory implantation procedure reveals that Quaid already has a ton of fake memories in his head, and that he is actually a secret agent called Hauser. This revelation leads him to Mars, and thrusts him into the middle of a conflict that has lasting repercussions for the whole planet.

The remake eschews the original movie’s planet hopping however, staying closer to the book, and thus remaining on planet Earth. Moritz said that director Len Wiseman, whose previous work includes Underworld and Live Free or Die Hard, was building a very real world for the movie, one where overcrowded cities just kept building higher and higher. Moritz said that it wasn’t as straightforward as just staying on Terra Firma though, and while he didn’t elaborate on what that meant, it’s not much of a stretch to imagine dreamscapes or mental landscapes making an appearance.

The production starts filming in May, and Moritz said that Sony is aiming to make this a big movie. It won’t be appearing in 3D, however, as Moritz believes it would be “too much” for audiences. “I think for certain movies [3D is] great,” he said. “And other movies it’s just not right.”

Poaching Pokémon for the Perfect Pokédex

Is Bulletstorm Appropriate for Kids, CliffyB?