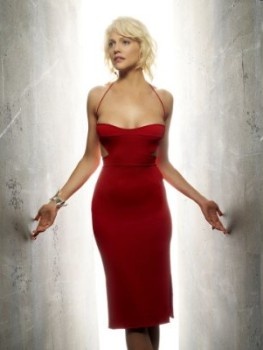 Blizzard has revealed that Battlestar Galactica hottie Tricia Helfer will be providing the voice of Kerrigan in the upcoming StarCraft 2.

Glynnis Talken, who provided the voice of Sarah Kerrigan in the original StarCraft, revealed in February that she wouldn’t be reprising the role in the upcoming sequel despite apparently providing voice work for early StarCraft 2 promotional trailers. Blizzard’s decision to cut Talken loose was rather surprising given her long history with the company but, as she said at the time, “That’s showbiz.”

Her replacement has finally been revealed as none other than Tricia Helfer, better known to the world at large as Number Six, the red-clad Cylon of Battlestar Galactica fame. It won’t be Helfer’s first foray into videogames; she’s previously appeared in in the Command & Conquer 3 games and Spider-Man: Web of Shadows. But following her introduction at Blizzcon, she admitted that she was unfamiliar with StarCraft and Kerrigan when she was cast in the role.

“It’s intimidating to come into a game and do a job that you don’t really know the history of it, I’m kind of a video game virgin in terms of playing. Personally I’m not technologically savvy,” she said. “At the time, I didn’t know what Zerg and all these things were. It was fun to find out all these little differences.”

There’s no reason to think that Helfer won’t do an admirable job in the role of Kerrigan but how this can be seen as anything but cheap stunt-casting is beyond me. Voice actors Robert Clotworthy and James Harper, who appeared in the original game as Jim Raynor and Arcturus Mengsk respectively, are both returning to their roles, yet Talken, who has appeared in a decade’s worth of Blizzard games ranging from Diablo to the Burning Crusade expansion for World of Warcraft, finds herself supplanted by the admittedly very attractive and instantly recognizable Cylon sex machine.

So… Is anyone else catching a distinct whiff of Activision in all this?

A View From the Road: Identity (Epic) Quest

Is There a Zombie on Blizzard’s Lawn?