Once upon a time, a young man found himself in a peculiar position: Summoned before a group of space aliens, (which would’ve been peculiar enough in itself,) he’d been asked to justify the worth of the human race by demonstrating some innate uniqueness to our culture. Or, as the aliens put it: “Tell us one original story from the history mankind.”

Thus far, the young man had failed. The great tales of human history – epic wars, royal succession, revolutions, discoveries – were, it seemed, not at all dissimilar from the great tales of a million other worlds… even the stories he’d misremembered or mistold.

Then, he had an idea: Tell them a story from his own life – an experience wholly his and no one else’s; the story of his first kiss. Abby Gingerson. 9th Grade. He recalled the experience beat-for-beat to his extraterrestrial interrogators, dwelling on every nuance and minor detail, the tiniest pieces of information forever burned into his memory – one of the most personal and meaningful of all his experiences. Surely this was a story they had never heard.

But the aliens simply shook their heads. “We’ve heard six billion exactly like it,” said one.

Now the young man was angry. They could dismiss human history, if they wished, but they would not speak ill of his memories of Abby. Abby, the most interesting girl he’d known. Abby, who played the guitar (perhaps not well, but with great earnest.) Abby, who’d dreamed of becoming an animal photographer. They had not encountered six billion of her. She was original. She was special. And these purple-skinned, three-eyed bastards were going to acknowledge it.

“Don’t be angry,” said another alien. “We’ve simply been cataloguing for a long time, there’s nothing we’ve not heard. This ‘Abby,’ for example, is a textbook example of what we would index as ‘Female-Type 447.3-B.’ Also sometimes called a ‘Kl’Bo,’ after a character in our popular-fiction who epitomizes the type.”

The young man would not have it. “What about the details?” he demanded. The fireworks that had exploded above them, celebrating a holiday only recognized in their small town. The one-of-a-kind aftertaste of Abby’s grape lollipop and root-beer flavored lip gloss that lingered after all these years. They’d heard those before, too?

“Such minor differences need not register,” sneered the first alien. “The broad outline of your story is the broad outline of six billion others. Thusly, there is nothing meaningful or significant about it at all – nor your species or planet, for that matter.”

The young man had no reply.

*****
Used to be, the only people who regularly used the word “cliché” were critics and professors. After all, it was their job to absorb more of their chosen fixation than ordinary people did, so of course recurring themes would be more noticeable. In fact, for a long time this was the key difference separating the Film Critic from the Moviegoing Public.

As a critic, I see a lot of movies – often multiple films in a day, multiple days a week. And that’s just at theaters; I see even more at home. In fact, on average I’d say I see at least one new-to-me movie every other day, and that’s probably lowballing it. Most people, I’m well aware, don’t consume movies this way. The majority of the public maybe sees a new movie each week, and maybe a handful at theaters.

As such, our perception of freshness in plot points and character turns is going to be radically different. When I say “so-and-so is a cliché,” it’s informed by having seen dozens – perhaps hundreds- of the same basic ideas play out many times before. You, on the other hand, may only have seen it once or twice before, or even never. Perhaps you’re young, or have spent years in a coma, and thus will be genuinely shocked when Kate Hudson decides she’d be better off with that goofy but lovable blue-collar fella than that snooty rich guy she was all set to marry at the beginning. 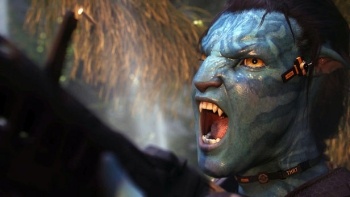 But now, that dichotomy has largely fallen apart. The internet’s “democratization of information” has made every plot point of every story ever told a mouseclick away, and it’s now possible to educate oneself about clichés without growing sick of them on your own. How wonderfully tragic: Instead of spreading knowledge, it’s merely accelerating jadedness.

The current nexus of this sort of thing is a genuinely wonderful website called TV Tropes, which seeks nothing less than to categorize every single recurring element of fiction, ever. You can look up any book, movie, whatever and instantly access an encyclopedic listing of every element it may have in common with anything else. For example, looking up the film 500 Days of Summer informs one that Zooey Deschanel’s character is a “Manic Pixie Dreamgirl.” Clicking on this brings up a list of every other “Manic Pixie Dreamgirl” character (including nearly every other role ever played by Ms. Deschanel, incidentally) with links to the entries they appeared in. And so on. This thing is a rabbit hole – you can lose whole days in there, if you’re not careful. Hell, for some reason there’s even a section dedicated to a certain Z-list internet pseudo-celebrity.

As a reference tool, entertainment and a crash course in narrative deconstruction, TV Tropes is useful and ridiculously fun. Sadly, this being the internet, you’ll always find people who manage to turn fun into something bitter and sad. Rather than enjoying the debate and discovery over how seemingly disparate stories and characters match up, a certain strain of killjoy primarily enjoys sites like this as a way to forcibly miss the forest for the trees. For them, TV Tropes and its kin are a shortcut to a false veneer of world-weary bitterness. “Yeah, I saw Coraline. Way too much Chekov’s Gun, and that one guy was a total Woobie. Seen it ALL before.”

Sometimes, this bleeds out in the broader culture. As you may have heard, newly-annointed “biggest movie ever” Avatar has a storyline that’s kind of similar to Dances With Wolves and Disney’s Pocahontas. This has been so widely commented upon that the film was the official #1 punching-bag for this behavior before it even opened. Finding new stuff that Avatar “rips off” of is a full-time scavenger hunt – name any aspect of the film that reminded you even slightly of at least one other film, there’s probably 20 YouTube videos breaking it down already.

Yes, fine, it’s not the freshest narrative in the world – but neither were all the “original” films it supposed borrows from. There’s very little new in stories – someone once broke the whole of fiction down to three categories: “Boy Meets Girl,” “Boy Loses Girl” and “Boy Versus World.” Psychiatrist Carl Jung thought there was really only one story, and Joseph Campbell agreed with him.

J.R.R. Tolkien certainly didn’t invent “diverse group carries something from one place to another,” but he did invent an entire mythology, bestiary, set of races and even the languages they spoke. Avatar‘s originality – and there is plenty of it – is similarly in the details: It creates an entirely fictional planet, ecosystem and species-heirarchy out of whole cloth. Two fully-realized opposing cultures. A pseudo-scientific justification of Gaia Theory. Sentient beings with what amount to biological USB cords growing out of their heads. Is it really more satisfying to ignore/dismiss all of that innovation in order to roll your eyes about “The Hot Amazon” or Quaritch being a “General Ripper“? 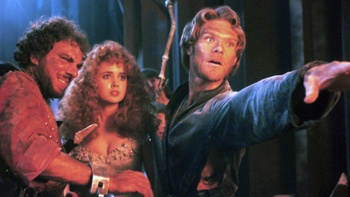 And y’know what? Even if the answer is “yes,” that still doesn’t excuse being a douchebag about it – there’s no greater abuse of nerdity than treating someone like crap because they’ve spent slightly less time cataloguing backstory minutia from Dragonball than you have. I’m aware that this is perpetrated mostly by “my people” and the more egregious examples thereof frequently find me wanting to reach through the internet, grab the offender by the collar and scream “KNOCK IT OFF! YOU ARE NOT A JADED ACADEMIC! YOU HAVE NOT ‘SEEN IT ALL BEFORE!’ YOU JUST READ IT ON TV TROPES BECAUSE YOU HAD AN HOUR TO KILL BETWEEN LUNCH AND FIREFLY RERUNS! NOW SHUT THE HELL UP AND APOLOGIZE TO THE 10 YEAR-OLD YOU JUST SPENT TWENTY MINUTES CHEWING OUT FOR NOT REALIZING THAT KRULL HAD A GIANT SPIDER BEFORE HARRY POTTER DID!”

The aliens were already on their way back to their ship, sharing smug laughter at having confirmed yet another world as too “formulaic” to be worth bothering with – this silly “Earth” with its archetypal inhabitants and the predictable arcs of their lives.

If even one of them had deigned to take one final look back at the young man they’d been interrogating, they might’ve seen a smile slowly creep across his face. Something had come to him: Finally, the story he was sure they’d never heard.

“Once upon a time, there were beings who wanted to have seen it all. And to prove that they could, everything they came across – no matter how lovely it may have been – they would cut into pieces tinier and tinier, until they could safely say that ‘everything’ was just the same old bits of dust. And for a time, this would make them feel superior. Secure.”

“Until the day that they would realize, with unfolding horror, the toll of their quest: That in seeking only the ‘original’ they had forgone the power to perceive all else. That they would never again be able to recognize ‘beautiful,’ ‘moving’ or even ‘frightening’… unable to truly see anything but for the dust it was made of. That having ‘seen everything before’ means you never really see anything again.”

Molyneux Calls Himself A “Talentless Bastard”