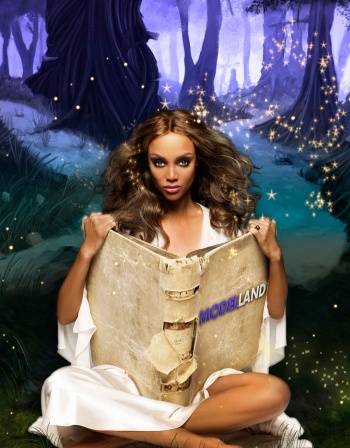 Tyra Banks is getting into the fantasy novel game with a series all about models. Magical models!

When I think of fantasy authors, the last person that comes to mind is Tyra Banks. Time to turn that smile upside down, as Banks recently announced that she’ll be penning a trilogy of fantasy novels taking place in a magical world known only as Modelland.

First of all, those double letter “L’s” bother me to no end, so she’s already starting off on a bad foot. She seriously wrote on her blog to clarify that the title is “pronounced ‘Model Land.'” If you’ll excuse me, I have to go explode with rage, reconstitute, and repeat until the end of time.

Details are currently sparse, but Modelland (remember, it’s pronounced “Model Land”) is a make-believe place where, according to Tyra, “every girl in the world wants to go.” The mystical power-wielding Intoxibellas are trained there, which by my best guess are drunk models that do card tricks.

The trilogy will follow a teenage girl and her teenage friends that get transported to Modelland (“Model Land”) even though they’re not supposed to be there. Can you imagine the shenanigans that may occur in this type of situation? I can: girl that isn’t supposed to become an Intoxibella becomes one anyway after lots of hardship and finally gets back at a particular nemesis that was a perpetual thorn in her side and shows the entirety of Modelland (“Model Land”) that anything is possible, the end. Then Tyra reveals that it’s all an allegory for her own life.

Basically, Tyra Banks wants to write the next Lord of the Rings. More specifically, the next Harry Potter, which by early information seems to be what Banks is ripping off here, but with the addition of models. If Modelland (“Model Land”) becomes a movie someday, I promise I will hurt one million children. Actually, never mind, the books will probably do that all on their own.