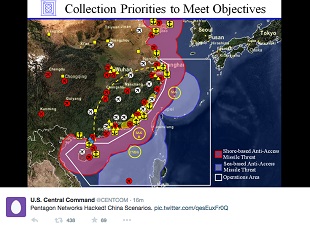 What if it was the WOPR finally acting on its plans to wipe out humankind.

@CENTCOM, which now shows up as a suspended user, represents the military organization that oversees U.S. combat actions in over 20 nations across the world.

The account was supposedly hacked by a group that claims connections to the Islamic State, as evidenced by this screencap. After the account was compromised, several documents were posted, allegedly due to a compromised Pentagon network. While Central Command has confirmed that its YouTube and Twitter accounts were compromised (and later suspended), no information on networks connected to the Pentagon has been made available.

“We can confirm that the U.S. Central Command Twitter and YouTube accounts were compromised earlier today,” said a DoD official to the press. “We are taking appropriate measures to address the matter. I have no further information to provide at this time.”

The documents tweeted out during the hack are semi-sensitive — at least in the topics they cover. Maps of North Korea and China were tweeted out, as was unverified information related to retired U.S. military generals. The maps of China and North Korea are based on largely public information, and don’t appear to be of a strategically viable nature.

Ironically enough, the hack occurred while President Obama was giving a speech at the Federal Trade Commission about privacy, and cybersecurity.

The Central Command website — centcom.mil — is still up and running.

Speedrunners at AGDQ Raise Over $1 Million for Charity

8 Horrible Television Shows From The 80s and 90s