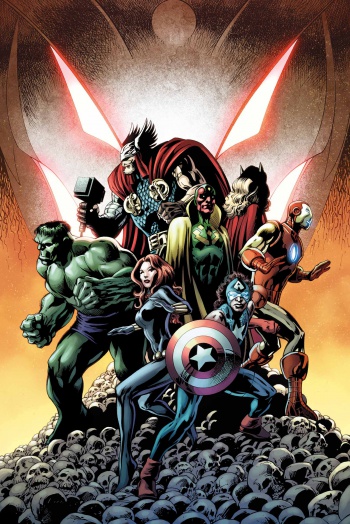 Marvel Comics Avengers: Ultron Forever will unite heroes from across time to face the Ultron Singularity – just in time for a certain movie release.

With Avengers: Age of Ultron‘s release just two months away, Marvel Comics is naturally interested in releasing Ultron-themed comics for fans. But since the comic book Avengers are pretty busy with other things right now, Marvel will roll out a standalone mini-series about Ultron and time travel called Avengers: Ultron Forever, written by Al Ewing with art from Alan Davis. The premise? Ultron is actually the singularity.

500 years in the future, Earth is a wasteland almost completely devoid of human life. Everyone who’s left lives under the control of the Ultron Singularity with no hope of resistance – except from Doctor Doom. The former Fantastic Four villain has a plan to defeat Ultron once and for all – summon superheroes from different time periods to form a new Avengers team. Now the present day Black Widow and Vision must work alongside James “Iron Man” Rhodes, the Hulk, two Thors, and Danielle “Captain America” Cage to stop Ultron at his height.

There’s a couple of ways to look at Ultron Forever. On the one hand, it’s very cool to see heroes from across the timeline working together like this. In particular, I absolutely love that Danielle Cage – the daughter of Luke Cage and Jessica Jones – somehow became the future Captain America.

That being said, Ultron Forever bears a very strong resemblance to Marvel’s Age of Ultron comic book. While Age of Ultron has no connection to the film version, it does present an apocalyptic future ruled by Ultron that can only be stopped by time travel. In fairness, the time travel mechanic is wildly different in Ultron Forever – plus Age of Ultron featured surprisingly little of Ultron to begin with – but it was published so recently that a retread seems unnecessary.

Still… Danielle Cage as Captain America is a good sign Ultron Forever‘s plot twists will stand out – even if this is just a movie tie-in. (Why else does Doctor Doom need Black Widow, from everyone in time and space, to fight Ultron?) I, for one, will be very curious to check this book out when it launches on April 1st.

8 World War II Games to take You Back in Time