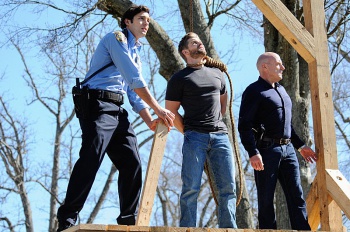 Penning the season 2 premiere of Under the Dome, King lends his unique macabre style to the show, and it pays off. There was more than one unexpected death inside the Dome last night, and palpable tensions between some of the main players were set in motion. In fact, there were times when I found myself wondering if they should rename the show Game of Domes… (I’ll let myself out.)

The premiere opened with a new character we hadn’t seen before — Sam Verdreaux, who we later discover is Junior’s uncle when he reveals, “Some things you never get over, like my sister taking her life nine years ago.” A blinding light beams from the Dome accompanied with a loud, metallic sound, engulfing not only his secluded cabin, but the entire Dome. He runs out to find Julia trying to save a mysterious girl who was “born” drowning in the lake, and helps resuscitate her while also establishing some serious chemistry with Julia in the process. Uncle Sam is clearly going to be an important player this season, as is the mysterious lake girl (who might be some human form of the Dome itself?).

The execution of Barbie didn’t happen, of course, thanks in part to Junior convincing his dad that the Dome doesn’t want him dead, and in part to Stephen King not being George R.R. Martin. Once released, Barbie goes to work with Linda, Junior, and Big Jim to discover that the Dome’s been magnetized. Barbie’s handcuffs pull and trap him to the edge of the Dome, but Linda manages to free him just before she’s crushed by an SUV. Though it was fitting that she went in such a nobel, sacrificial way, it was still a shock to see Linda killed so quickly in the season. 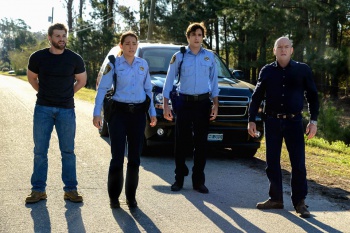 Later, ghost-forms of Dodi and the freshly-killed Linda appear to Big Jim, warning him that if he doesn’t show an ability to sacrifice himself for others, more people will die. Showing an unprecedented concern for Junior after he’s knocked out by another electromagnetic wave, Jim decides to do the Dome’s bidding and hang himself. Julia and Barbie find him in his moment of sacrifice, but Julia manages to cut the rope just as he’s about to have his neck snapped. “The Dome doesn’t want us to kill you, it wants us to end the killing,” she insists. Big Jim seems to get the message loud and clear, which in turn ends the magnetization of the Dome.

Sexual tensions between Julia and Uncle Sam, as well as Barbie and the eager science teacher, Rebecca Pine, have also been established, which means we will probably see some obstacles for Julia and Barbie’s relationship in episodes to come.

The two most shocking moments of the night were at the end, however, when we discovered that Junior’s mother — who appeared to him in a dream when he was knocked out — is actually alive, living outside the Dome. We also saw Angie follow the lake girl into a school, where she scares the girl off after finding her looking at something inside a locker. Attempting to see what it was the lake girl was looking at, we see a horrified look on Angie’s face, immediately followed by an axe coming down and brutally slashing her. Bye bye Angie, hello macabre season 2.

The premiere did an excellent job of setting up important questions for the upcoming episodes. Who is the creepy lake girl, and why does Uncle Sam have a drawing of her? Does Big Jim know his wife is alive, outside the Dome? What killed Angie, and why? Will we be forced to like Junior at some point, even though that seems virtually impossible? One thing is for certain — no character is safe in the Dome, no matter how “good” Big Jim is now…