As promised, I’m going to give out some quick capsule thoughts on a selection of the third party game trailers from E3 to discourage anyone from getting excited, but first I’d just like to quickly address David Jaffe’s statement The Escapist reported on last week: that game critics need to call developers out more often on always doing the same old shit. Fuck yes, man, and I’m doing the best I can from my end of the trench, but I think everyone has to split the blame for the state of the industry – the press, the creators, and the audience that keep buying it. Besides, this coming from David Jaffe, David “Twisted Metal, Twisted Metal 2, Twisted Metal Black, Twisted Metal Head On: Extra Twisted Edition and Twisted Metal Again” Jaffe, smacks a little of a five-year-old faecal artist trying to blame his older sister for not tattling on him fast enough.

Anyway, my first thought for this column was to only give coverage at all to the games that weren’t sequels, reboots or spin-offs, but it soon became clear that it would be a pretty fucking short column in that case. It would pretty much just be about Dead Island, and even that, I mean blimey, if the zombie thing was overdone five years ago it’s jerky by this point. So let’s be less discerning and dive into some trailers. Obviously it’s tough to swing this with my usual policy of not watching or playing anything that might taint my eventual review with hype and expectation, so I’m just going to watch one trailer for each property and extrapolate from there.

Okay, that’s one way to innovate, I suppose, setting it in the sky rather than the sea. Not that it seems to matter as long as the city’s isolated in some way, just as BioShock didn’t have any swimming, I doubt Infinite will have any platforming sections either (well, there’s some flying around but it’s literally on rails). Am I the only person who kind of prefers FPS protagonists to be silent? I mean, except maybe the ones who only ever talk to themselves like Thief‘s Garrett, because I feel kind of left out when there’s a conversation going on and one of the voices appears to be floating out from under my balls.

I guess the “revelation” is that Assassin’s Creed isn’t going to be about exploring a new time period each game, Blackadder-style, as I originally believed to be the case after 1 and 2, because it’s more faffing about with Altair and Ezio again. Now, I like Assassin’s Creed, and what I’ve always liked about it is the way it encourages sneaky stealthy thoughtful approaches to quick surgical strikes before slipping off into the crowd. So when the trailer depicts Ezio having a big old crazy scrap with like a hundred guys, my fingers grope for my temples. Still, the trailer is entirely pre-rendered cinematic, which means we can basically completely write it off as far as representing the finished product goes. Nothing illustrates this better than:

… whose gameplay trailer deserves some kind of award for killing 90% of the interest that would have been created from the first trailer. The first trailer (pre-rendered) being a heartbreakingly good, artistic, non-linear depiction of the final tragic moments of a vacationing white bread family in the zombie apocalypse, and the gameplay trailer telling the tale of some irresponsible drinkers swinging machetes about. Still, looks like something I might get some fun out of, but definitely nothing like anything the first look implied. 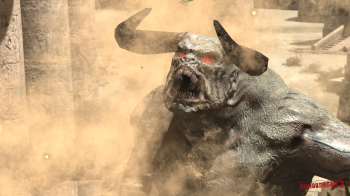 Again, lots of cutscene bollocks on display, but from the brief snatches of gameplay shown it certainly does look like a sequel to Oblivion, for better or worse, with some gratifyingly different environments at least. As ever one must read between the lines with any trailer, and knowing the Elder Scrolls I can’t help but wonder if the most representative part of the trailer is the brief, mystifying snatch of gameplay in which the protagonist stands in a cave firing a magic spell at what appears to be absolutely fucking nothing.

Mass Effect‘s always kind of drifted around quality-wise looking for the right mix, so I guess we’re hoping third time’s the charm. The trailer doesn’t seem to communicate much besides a load of shooting on foot. You know, if any series is in a position to reintroduce entertaining real-time space combat and exploration like I’ve said for years needs to make a comeback, it’s this one, but no, I guess we’re all still a little too attached to our chest high walls, aren’t we. And it still bothers me that Shepard, most important and famous motherfucker in the universe, is even worse at delegation than Captain Kirk. What happens if you get killed in the field, smart guy?

It’s well documented that I love Serious Sam, but I was very disappointed by the screenshots I saw of number 3 showing very straight-faced dusty grey-brown glistening bollocks in a franchise I loved for its fast pace, bright colour and unabashed silliness. Listen, shooter developers – we’re good for grey-brown dusty ruined cities. We’ve got plenty of those to last the winter, but without a balanced diet we’re probably all going to get scurvy. I’m not too proud to admit that the tagline “No Cover, All Man” did cause me to have a little squirt, though.

Is it me, or has Lara Croft’s accent drifted east along the Thames a bit since last we saw her? Well, it’s a prequel, perhaps this was before she went to elocution lessons. From what I gather this new example of that hateful “reboot with same title” trend has a new puzzle gimmick they’re calling “Survival Instinct” but nothing tells me it’s not just going to be another action-adventure egg basket. It’s a little disappointing because I’ve often thought there needs to be a really decent survival-based game, like you have to cross a procedurally-generated desert while watching your food and water intake and finding shelter for each night. Whatever happened to that I Am Alive game Ubisoft were banging on about a while back? Better release something soon or that name’s going to start becoming ironic.

Not that I’m one to crow but I just want to slap a big fat “called it” on this one. I said at the end of the Halo: Reach review, despite Bungie’s efforts to draw a decisive line under their seminal franchise, I fucking knew Microsoft wasn’t going to let that particular cash cow finish its cud and leap the farmyard fence with dignity. Honestly, some people just can’t let go of the past, can they.

OH GOD IS THIS THE EMOTION YOU CALL JOY????