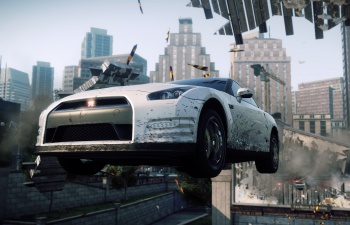 A spokesperson confirmed that the founders of the Burnout and Need for Speed developer have left the studio.

The founders of Criterion Games, Alex Ward and Fiona Sperry, have both left the company, according to parent company Electronic Arts. Ward had served as vice president and creative director of Criterion, while Sperry was the studio director. “We appreciate their many contributions through the years and wish them well in their future endeavors,” an EA spokesperson told Polygon this morning.

The studio was founded in 2000, and made a name for itself with the Burnout racing series. The company later took over the Need for Speed franchise, which is now being managed by Ghost Games. Criterion remains “hard at work on a new project for next generation consoles,” according to EA. In September, the studio cut 17 jobs from its staff. Sperry stated that the cuts were not EA’s fault, but the result of transferring staff to the studio Ghost Games, who had recently begun work on the latest Need for Speed game, Need for Speed: Rivals. We have reached out to EA for additional comment on Sperry and Ward’s departure from the studio.

UPDATE: The Escapist received a response from an EA spokesperson earlier today regarding Ward and Sperry’s departure. Admittedly, it’s not much we didn’t already know, but the statement is printed below for you to make your own decision:

“Alex Ward and Fiona Sperry have decided to leave EA. We appreciate their many contributions through the years and wish them well in their future endeavors. The incredibly creative and talented team at Criterion are hard at work on a new project for next-gen consoles as new IP continues to be a major priority across EA. Matt Webster is leading development of the new game and the Criterion studio moving forward. Matt has been part of Criterion for years and has an exciting vision for this new game.”

This past weekend, Ward elaborated on Twitter that he and Sperry left Criterion so they could own a company of their own.

Nintendo Forced To Pay Royalties to Tomita on Every 3DS Sold