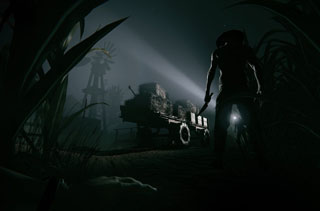 UPDATE 2 (3/27/2017 7:30 PM ET): Red Barrels has reached out to us with an explanation of just what happened with the classification of Outlast 2. The PR representative explained the confusion as follows:

“The original submission of Outlast 2 sent to the Australian Classification Branch contained the final game code and a video file for reference taken from an Alpha version of the game. This video file should not have been sent along with the game code, as its content was not representative of the final game.

In the second submission, the same game code was submitted with a video file reflecting the final game content. The game was then approved for release with an R18+ rating. There will be only one version of Outlast 2 available worldwide.”

So, it sounds like the refusal to classify was based on outdated material, and that there were no changes made to Outlast 2 after all. That’s good news for everyone involved.

UPDATE: The Australian Classification Board has told IGN that at the request of the Australian distributor for Outlast 2, the report on the reclassification will not be released until March 25. More importantly, the Board said that “it is satisfied that that the original version of the game that was refused classification has been modified to allow the game to be classified R18+.” This makes it fairly clear that not only was the game edited to remove the content that the Board found objectionable, the worldwide version has received similar edits. We’ve reached out to Red Barrels to confirm this, and will update with any reply we receive.

Red Barrels announced today that Outlast 2 has now been classified for release in Australia.

Last week, the Australian Classification Board refused to classify Outlast 2, effectively banning the game from release in that country. At issue was a scene that the Board said contained “implied sexual violence” that “cannot be accommodated within the R18+ category.”

The decision caused a bit of irritation for some, including our Senior Editor, Liz Finnegan, who took issue with the decision. It was even brought up on the floor of the Australian Senate, as Senator David Leyonhjelm urged the board to “Leave gamers alone.” But today, Red Barrels announced that the game has been classified in Australia. It’s not clear if the game has had changes made or not, so it could be that the game was edited for worldwide release, or that nothing in the Australian version have been changed.

In a statement given to Press Start earlier today, Red Barrels said,

“Outlast 2 has been rated R18+ by the Classification Branch in Australia and will be released 26th April 2017. There will be only one version of Outlast 2 available worldwide.”

Outlast 2 will release worldwide on April 25 for PC, PS4, and Xbox One.

Those Call of Duty: WWII Images Are Related to This Year’s Game, Sources Say