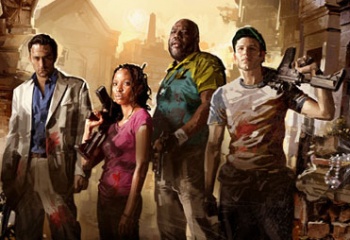 Rev up those chainsaws, Survivors: Valve has announced the first DLC campaign for Left 4 Dead 2, bringing both groups of Survivors – new and old alike – together in “The Passing.”

While the datamined DLC hints found in the L4D2 demo back at the end of October turned out to be merely placeholders, it seems that there was a grain of truth to them: The game contained character portraits for the first four Left 4 Dead survivors as well as the new quartet, and the very first piece of DLC for the game will in fact bring both groups together.

Targeted for release on PC and Xbox 360 in early spring 2010, “The Passing” brings Zoey, Louis, Bill and Francis down South for a run-in with Coach, Rochelle, Ellis and Nick. According to the official press release, the new campaign takes place immediately after “Dead Center,” the game’s intro – after escaping the mall in Savannah thanks to the stock car of racing legend Jimmy Gibbs, Jr., the L4D2 survivors encounter the first quartet in a small rural Georgian town.

Though the press release only mentions being able to play as the L4D2 cast in the normal campaign mode as they meet up with the L4D1 folk, it also says that “The Passing” will “include new arenas for Survival, Versus and Scavenge mode and introduce a new co-operative challenge mode of play.” Presumably we’ll be able to choose any of the eight in Survival and Scavenge, and this “new co-operative challenge mode” makes me think that there will be a mode specifically designed for all eight Survivors to be played at once – in other words, an official Left 16 Dead (16 if you include the zombies, that is).

The new campaign will also introduce a brand-new “uncommon common” zombie (if I’m reading that right, not like the Spitter, Hunter et al, but like the CEDA agents, clowns, or riot police zombies unique to each campaign) as well as a new melee weapon and gun.

“The Passing will become the most important campaign in the Left 4 Dead story, as all the Survivors are being called together in one campaign,” said Valve’s VP of Marketing, Doug Lombardi. “It will also be a huge offering of new gameplay content, with something new for every game mode plus a new uncommon common and weaponry.”