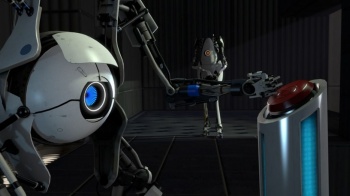 You’ll have to wait a little longer to play Portal 2, but cheer up, because it could have been a lot worse.

It’s bad news for gamers, as Valve has announced that Portal 2 will miss its February release date by a couple of months. It’s good news for Valve however, as the two month slip represents the shortest delay in Valve’s 14-year history.

Valve didn’t say what had caused the delay, just that it was a sign that the oft-talked about “Valve Time” – a jokey reference to the fact that Valve will announce a date or a time and then almost never stick to it – was getting ever closer to “Real Time.” The eventual union of the two would have dire consequences for the humanity, Valve said, but would not result in any more delays for Portal 2. This is obviously disappointing, but Valve has so much goodwill among gamers it’s hard to imagine too many people getting mad at the company. Besides, two months is nothing compared to the three years – and counting – we’ve been waiting for Half-Life 2: Episode 3.

As long as there are no more fluctuations in the Valve Time Continuum, Portal 2 will now come out for PC, PS3 and Xbox 360 on April 18th. This is the second time that Valve has pushed back the release date for the game though, so it might be worth using a pencil to mark it in your diary, rather than a pen.