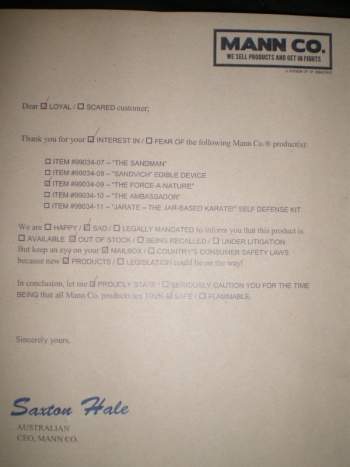 A clever Team Fortress 2 fan printed out and sent the coupon from a fake catalog ad that Valve created for one of The Scout’s new items. Valve actually responded, and they did so not only in style, but without breaking character.

Remember the fake catalog advertisement Valve produced for The Scout’s Force-A-Nature gun? There was a coupon at the bottom of it, just like you used to find in the catalogs common back when people actually used the mail to buy things.

“MAIL COUPON NOW,” it said, and one clever TF2 fan did just that and mailed it Valve. He or she probably got a chuckle out of it but didn’t expect Valve to write back. Valve did.

They didn’t just send a cheeky letter, though. They sent one that’s done up to look like stationary for the fictional Mann Co. that produces all the weapons, with a company logo and a sly stamped signature from Saxton Hale, the CEO of Mann Co himself.

The actual content of the letter is full of the clever humor that Valve seems to pack into everything TF2 nowadays, and even provided a hint about The Ambassador, the Spy unlockable announced yesterday. There’s also a mention of TF2‘s April Fools Joke, The Jarate, a throwable jar full of urine. Confirmation of The Sniper’s next item? I hope so.

If you can’t read the writing from the attached image, click over here for a good laugh.

It’s funny, sure, but if this is how Valve is spending its precious work hours these days, Half-Life 2: Episode 3 is never going to come out.

Atlus Brings Demon’s Souls To US