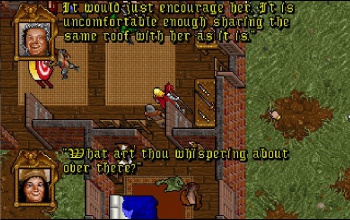 Richard Gariott’s RPG masterpiece can be had for the price of a sandwich.

Ask any computer RPG fan over the age of 40 which series got him or her into the genre, and Ultima will be at the top of the list. Richard Garriott – Lord British himself – created a living world in Britannia that enchanted gamers with the breadth of play available. Each Ultima improved on the last, with better graphics, sound and origianl open-world storytelling, but perhaps the crowning achievement was Ultima VII released in 1992. After years of being out of print and unplayable on most PCs without serious hacking, the complete edition of Ultima VII with every expansion is now available for download on GOG.com for a cool $5.99.

Garriott himself called VII “the most masterfully executed of the Ultima series” and it is the inspiration for other open-world RPGs like Baldur’s Gate and even Skyrim.

The package on GOG.com includes Ultima VII: The Black Gate, Ultima VII: Forge of Virtue, the direct sequel Ultima VII Part Two: Serpent Isle and its own expansion Ultima 7 Part Two: The Silver Seed. All that for the price of a Philly cheesesteak? Yeah, if I wasn’t neck-deep in Skyrim, I’d bite me off a piece of this RPG sandwich.

Head over to GOG.com to check it out.

While it’s great that Good Old Games is verging into offering more modern games DRM-free, I hope that the Polish company continues to resurrect older games. How about some X-Wing, GOG?

Kotick: LucasArts Profits from The Old Republic, Not EA