If you are yearning for a side-scrolling beat-em-up akin to Turtles in Time & Castle Crashers but with Vikings, then Viking Squad could be right up your alley! (or lane!)

Viking Squad, from the small team at Slick Entertainment, showed off some lane-based co-op carnage at PAX Prime’s Indie Mega Booth this year, and I was excited to release my inner Viking. While some details put into Viking Squad are exactly what you’d expect – the emphasis on fight style over character and action over story – others came as a pleasant surprise – upgradable characters and an attempt to fix missed attacks caused by a messy z-axis. It’s a new take on an classic genre, and it’s a heck of a good time!

From what I could gather of the storyline from Programmer Nick Waanders, which wasn’t much, admittedly, your boss has been possessed by an evil demon/Loki. He commands you and your comrades – up to three player local multiplayer – to pillage neighboring towns and to bring him back all of the relics and treasure you can carry. There are four playable Viking characters to choose from, designated by weapon rather than character name – archer, hammer, shield, and axe – and each has different attacks and specials. New weapons can be acquired throughout the game, but I imagine the play style of each hero remains consistent throughout. 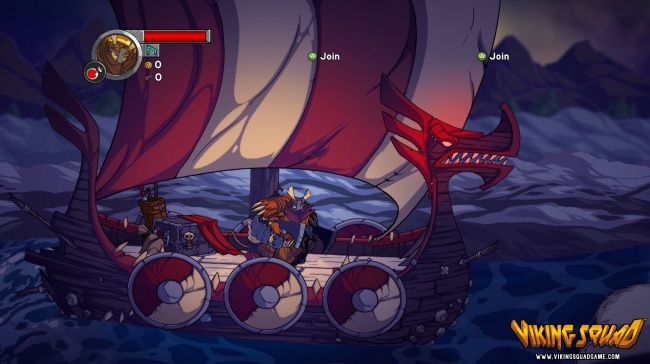 The demo at PAX showed off the first ‘zone’ of the game. Trisha the Scrappy – the name of my plucky little viking – traveled along with two other Viking players to and from various stages via longship, and encountered two major boss battles. Right away, the 2D hand-sketched art style by artist Jesse ‘Drawbarian’ Turner drew me in – not too serious, yet not too cartoonish. The control mechanics were very retro in feel – directional stick, jump, and attack – with various combos available as per your hero’s move set. The most apparent deviation from the retro feel is what Waanders referred to as lane-snapping. Whenever a hero stops moving, they are automatically “snapped” into one of four tracks so that they are perfectly in line with items and enemies. In theory, this should enable players to hit their mark more often. I found it a bit frustrating to get used to, but I can see how it would help if I had more time with the game.

Once a level is completed, the players return to camp where heroes can level up, upgrade stats, purchase items, worship gods, get new gear, etc. Having the ability to upgrade and customize characters in this way is a nice touch. Another fun feature is that there are multiple paths to choose in any given level and maps are procedurally generated to enhance the replayability factor.

While the main level was relatively simple to get through with friends, the bosses presented more of a challenge. It took a few attempts to learn the attack pattern of the first boss I faced, which had the head of bird and multiple tentacles. After defeating that boss, we moved on to face a giant yeti who, alas, got the better of us a few times before we felt obliged to relinquish our controllers to new players. Note that each hero can only be revived once per level/boss fight, and only if another player gets there fast enough, so remember to block.