Developed by Ino-Co Plus. Published by Paradox Interactive. Released April 10, 2014. Available on PC. 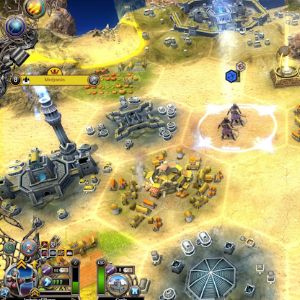 The fantasy tropes continue to be milked in the easy-going Warlock series from Ino-Co. You can still summon dragons, create a skeleton army and cast magical spells in your quest to win the game. In Warlock, you balanced resources as you explored the world of Ardania, jumped to different planes via static warp gates, and ultimately bested your rival Great Mages through research or warfare. Although Warlock 2: The Exiled adds game modes, fine-tunes features and buffs some polish on to that same basic formula, it failed to grab me as much as its predecessor.

In Warlock 2, you explore a fanciful map of hexes with units like archers and fighters, kill wandering monsters, and meet rival Great Mages you can befriend to trade with or just be a dick and conquer. You can also direct the research of spells you can cast for a whole bunch of uses, from bestowing benefits on your units like melee resistance or magic flight to damaging your enemy’s units, terraforming the land and creating magic items. Balancing the resources of gold, food, mana and research in the cities you found or capture can feel like work, but strategy geeks will enjoy forming a functioning empire. The system of only allowing one building per hex per population, and unlocking more powerful units as you go up the tiers of structures, continues to be a unique blend of turn-based and real-time strategy conventions.

Random events occur frequently, forcing you to engage in a simplistic – and tedious – dialogue system. There’s no reason you need to read a dialogue option, select it, and then have another pop-up display what you just selected. The writing of these events and quests is also disappointingly tiresome, although the flavor text associated with each unit will sometimes elicit a chuckle.

I liked the simple background story in the first game – you were a Great Mage in the land of Ardania attempting to assert your leadership in the council of mages. This “assertion” was usually military in nature, but you could also win the game by researching and casting a unity spell – roughly equivalent to the scientific victory in Civilization. In Warlock 2, the story is pushed to the forefront, and the strategy experience suffers for it.

While your character was off dealing with the story events in the expansions to the first game, a conniving mage casts the unity spell and shatters Ardania into different planes of existence. That event sets up the introduction of Exiled Mode. You start out with one city on a random shard, and the goal is to get back to the plane of Ardania and defeat the big bad guy – now called the United One. The first time you play through in Exiled Mode, the story feels new and fascinating. The lieutenants of the United One throw dastardly challenges in your path such as blighting the hexes around your cities and attacking with powerful dragon units. Gates allow you to travel to the other planes and there’s usually a barrier you have to overcome, like paying mana, defeating a monster, or answering questions in a Monty Python ripoff scenario.

But after several playthroughs, Exiled Mode becomes extremely predictable and boring. The same events will pop up in generally the same order each time. You never get to fight the United One or take over his city directly. Instead, your forces must slowly chip away at the lieutenants’ huge hit point totals using a little-explained rubric. You can’t kill Vendral the massive dragon until the lich guy is also dead, but the lich guy will be resurrected immediately if the Empress is still alive, so you have to kill her first. The puzzling mechanics of the endgame don’t offer a real challenge – once you’ve reached that point you are usually developed enough to win the game – all the silly order does is prolong the inevitable. Once you’ve played through Exiled Mode once, there’s little incentive to play again. That is death for a game like Warlock, which should be praying to the altar of replayability. The story mode feels far too linear for a strategy game that should reward exploration over memorizing of story beats and puzzles.

Exiled Mode seems to be what the designers want you to play – and it’s worth playing once to get the feel of it – but most players will enjoy experimenting with the sandbox mode and newly patched-in “Battle of the Outplanes” Mode. Sandbox lets you play how you want and doesn’t even mention the United One. Play concentrates on one plane, with some neighboring planes available via a few gates, while the Battle of the Outplanes has the huge number of shards available in Exiled but without the restricted win conditions and heavily-structured story. The addition of the latter mode was a much-needed compromise between the linear and the sandbox, and the options to play the way you want are welcome.

The lack of choice in the favored mode is odd given how much the rest of Warlock 2 drowns you with options. The modding tools, allowing users to customize nearly every aspect of the game from unit attack values to creating quests, are incredibly powerful. Spell research is no longer randomized – you can choose how to progress in power as a Great Mage. While there is a breadth of different leaders to choose from by default, you can customize your own Great Mage’s starting race, traits and spells with simple-to-use interface.

Just providing a large breadth of options doesn’t make a game great, though. The user interface could use more of an update so it doesn’t just feel like a retread of the original, and while the graphical effects such as spell casting and unit animation look good, the trade off is that Warlock 2 doesn’t run well on older PC builds. It seems for every aspect I can praise for the game, there’s something it could have done better.

Bottom Line: Warlock 2 offers a lot of options for a fantasy strategy fan, and the Exiled Mode is fun the first time, but there’s something missing in the formula to make it a truly memorable game.

Recommendation: Buy it to play around with the modding tools, or to kill an afternoon or two taking out rival Great Mages.

Gamers Tend to Be More Libertarian, According to Survey