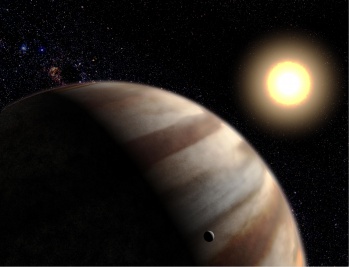 Astronomers have used a new technique to detect water vapor within the atmosphere of a distant planet.

While water vapor has been detected on other planets in the past, a new technique developed by Caltech astronomers will make it possible to do so on planets that would have otherwise remained a mystery. In a paper published in the Feb. 24 volume of The Astrophysical Letters, the astronomers explained how the recent detection of carbon monoxide on a distant planet inspired them to employ a similar technique to detect water.

The majority of extrasolar planets do not fit the previously established criteria for detecting water vapor in their atmospheres, including planet “tau Boo b.” But by using a technique that analyzes shifts in the wavelengths of the light emitted by the planet, the Caltech team was able to pick out water among the various molecular signatures.

“The readout we get from Keck Observatory’s [Near Infrared Echelle Spectrograph] is like listening to an orchestra performance; you hear all of the music together, but if you listen carefully, you can pick out a trumpet or a violin or a cello, and you know that those instruments are present,” said graduate student Alexandra Lockwood, the first author of the study. “The instrument allows you to pick out different pieces; like this wavelength of light means that there is sodium, or this one means that there’s water.”

This new technique is presently limited to “hot Jupiter” planets – gas giants like tau Boo b that orbit very close to their sun.

In Honor of Harold Ramis, Burnout Paradise Lets You Race the Ecto-1 for Free