I love a good screenshot, especially one snapped from an up-and-coming title. In fact, I’ve long believed there’s no quicker way to get a read on a game I haven’t yet played. I don’t always want feature lists or developer interviews. Sometimes a good screen grab is all I need.

I’m not talking about those carefully staged, artfully cropped pseudo-screenshots that show up on official websites and the backs of game boxes. You know, those images that aren’t really from the in-game camera’s perspective and that conveniently do away with any interface elements. I’m talking actual, in-game screenshots, complete with targeting reticules and health meters and minimaps.

There’s a language to every game screen, one familiar to most gamers. The position of the camera, for example, is immediately evident and has unavoidable implications for a game’s design. Does the world spread out before me in all directions, or does it roll across the screen? Will I see through the eyes of my character, or will I be piloting an avatar through physical space? Is the fate of an individual in my hands, or will I be managing the efforts of entire civilization?

And then there’s the interface. A mere glance at a screenshot will tell you whether you’ll confront the world from behind a set of crosshairs or from above a battlefield. You’ll see what you’ll be tracking from moment to moment, be it mana or resources or XP or ammo. If you’ll be adventuring with others, you’ll know, and you’ll probably be able to tell whether they’ll be real-life friends or computer-generated companions.

RTS, RPG, JRPG, FPS. Pick a genre acronym, and there’s a generally recognizable camera position and interface to go with it. In fact, the camera and interface information in a single screenshot may be enough make or break a gamer’s interest in the title it depicts. Which, for better or worse, demonstrates the strength and uniformity of established genre conventions. Games look the same because they play the same.

Not that there aren’t exceptions. While many developers still clutter up screens with pictures of controller buttons and the like, plenty more seem ready to do away with interface contrivances altogether. Fight Night Round 3 and King Kong, to name a couple of earlier examples, dropped HUD elements to provide feedback to players through in-game effects. More recently, Alone in the Dark (pictured) followed suit. Upcoming titles like FarCry 2 and Dead Space continue the trend by taking maps and inventories out of separate screens and building them directly into the game world. 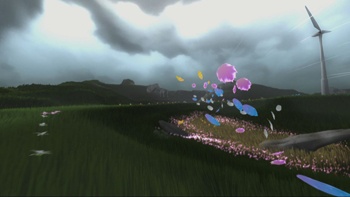 Games that break from genre norms, or incorporate design ideas from multiple genres, also produce screenshots that are more difficult to read. Take Flow, for instance, which yields screens that look like they were pulled from the lens of a microscope aimed into a drop of primordial ooze Or Okami, whose brushtrokes and hand-painted textures would be more at home in a classical Japanese print than on a video screen. And there’s the upcoming MadWorld, whose screenshots show black-and-white scenes awash in red blood that look more like something you’d see in an artsy animated short than in a videogame.

Although they’re more difficult to decipher, screens from these games are certainly beautiful to look at. In fact, they resemble those staged faux-screens more than they do traditional screenshots. And as a result, they tell the viewer a good deal less about how the games they depict will actually play.

The tradeoff, though, is that they tell a good deal more about how these games will feel. I actually have no idea what sort of things I’ll be worrying about or keeping track of as I play MadWorld. The same is true if Flow‘s upcoming successor, the equally concept-driven Flower (pictured). But think I have a good idea of what both games are about on an entirely different level, owing to the powerful thematic visions that their screenshots present.

The term “Art direction” seems to pop up in gaming discussions and critiques with much greater frequency than in years past. I’m sure it’s a response to the medium’s evolving maturity, driven by developers keen on exploring the relationship between artistic content and gameplay design. I don’t think it’s coincidence that the least decipherable screenshots I’ve seen lately have often been the most visually powerful. Developers intent on delivering unique, potent experiences are reimagining the ways players experience their games, and when necessary tossing out old ideas.

It’s a bit disconcerting to discover a game whose screenshots yield few clues to its underlying game design. On the other hand, it’s exciting to see more and more screenshots that wouldn’t look out of place as framed artwork. Assuming that such screens are evidence of a given developer’s emphasis on artistic vision is, I admit, a leap of faith. But it’s one that I’m increasingly willing to take.

Adam LaMosca is a researcher and writer in Portland, Oregon, who probably has more digital images of his journey through Half-Life 2 than he does of his trip to Paris.