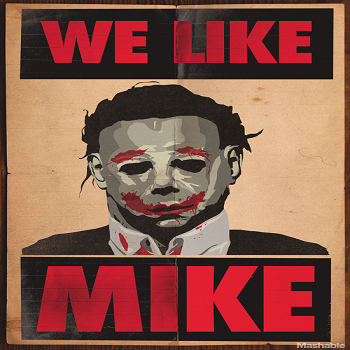 We’ve seen Donald Trump photoshopped into famous horror movies. We’ve seen slasher icons re-imagined as sexy pinups. It was only a matter of time before someone out there combined the two.

In this politically volatile climate, it seems that more and more of us have grown tired, perturbed, and downright fed up the current crop of potential presidential candidates. We are the armies of the disenfranchised, and we need a strong, truthful voice to stand behind, dammit! We need a leader not only willing to slash through our national debt, but through the competition, literally! We need a figure who was raised outside the current political system — be it on the shores of Camp Crystal Lake, the shadows of Haddonfield, or the darkest corners of our very dreams!!

But where we stayed silent, Mashable editorial illustrator Donte Neal took to action, drafting up a series of incredible campaign posters for the likes of Jason Voorhees, Michael Myers, Freddy Krueger, and all the iconic movie villains that could *actually* make America great again.

Check them out below.

It’s hard to pick a true frontrunner here, but I think I’m leaning toward Voorhees. Like Teddy Roosevelt before him, Voorhees speaks softly, carries a big stick (machete), and has the kind of self-deprecating campaign slogan that a Donald Trump or a Hillary Clinton could really use to sway undecided, politically ignorant, and easily-swayed voters like myself. Voorhees also happens to be a family man — or at least, he was for a time — and holds the kind of strict Christian values that would surely appease GOP voters. It’s a win-win!

How Cosplay and the “Normie Stare” Made Me A Better Person