In the beginning, Old Hollywood had a problem: It wanted to wow audiences with the spectacle of unseen sights, but the realms of overt fantasy were still difficult to attain without obscene expense. The solution? Ancient History – just far-flung enough for realism to be relative, and everyone had at least a vague idea of it.

Aside from the Middle Ages, which were a given, the most popular ancient settings quickly became Egypt and Rome. It’s not hard to guess the main reasons: mystery and exoticism. But soon enough, a more subversive rationale emerged. After a brief period of movie content rules being essentially “anything goes” (and boy did it) a wave of moralistic outrage from both community-betterment do-gooders and religious conservatives (they weren’t always enemies) drove the studios to impose rigid self-censorship, and Hollywood lived for decades under the so-called Hays Code.

Funny thing about Hays, though. It was mostly imposed at the subjective whim of Mr. Hays himself, (and later his successors) which meant canny filmmakers learned to exploit the censor’s personal biases. Will H. Hays himself, for example, was a devout Christian (a Presbyterian elder, in fact), and he was frequently amenable to allowing certain “immoral” activities to appear on film if said film was depicting “true events” as described in The Bible. After all, who wants to bleep the Word of God? And since Egypt and Rome figured so prominently in The Good Book, well, there you go.

Unquestionably, Rome was the more popular of the two – its social structure was more immediately familiar to mainstream audiences (translation: Rome had more white people) and its bread-and-circuses pageantry was can’t-miss fodder for the Silver Screen. Gladiator combat? Execution by lion? Hedonistic banqueting? All good things. The Roman Epic became as much a staple genre of Hollywood as the Western, continuing to modern hits like Gladiator and this week’s Escape to the Movies subject, The Eagle. Here’s a sampling of the biggest and/or most-infamous ones that made the genre what it is:

Like I said, Hollywood’s Roman fixation extended back to before the Hays Code simply based on the potency of the available imagery. Sign technically has a story (a Centurion falls for a Christian girl during the reign of Nero) but it’s just a thin framework on which to hang scenes of debauchery and spectacular violence. Our hero buys his would-be girlfriend a lap dance from a Sapphic dancing girl, pre-Code knockout Claudette Colbert skinny-dips in a pool of milk, dwarf gladiators get hacked up by Amazons in the arena, gladiators pummel one another with iron-spiked gloves and condemned prisoners are fed to lions, crocodiles, gorillas and even elephants!

Director Cecil B. DeMille made his (sound era) name on this one, and though the non-spectacle scenes play as unintentional comedy today you can see the root-DNA of every similar epic since in every frame. The racier footage actually was chopped out for reissues during the Hays era, and DeMille himself reworked it during World War II, adding a framing device where the story was told by American soldiers as their planes passed over present-day Rome.

The first “Widescreen” (CinemaScope) movie was a Roman epic, based on a bestselling novel by Lloyd C. Douglas. Like a lot of similar tales, it uses the pop culture conflation of Rome and the New Testament to add elements of the supernatural to the proceedings. This one involves a “What if?” scenario built around the character of the Roman soldier who, in some accounts, wins the robe belonging to Jesus of Nazareth in a post-crucifixion dice game.

Richard Burton (whose bread and butter was movies like this) has the lead, and finds himself in possession of the titular Robe, which possesses the latent supernatural-energies of its former owner and which The Emperor has ordered found and destroyed. He teams with former slave Demetrius, and becomes a protector of Rome’s now-persecuted Christian minority.

Along with being the first Widescreen movie, it’s also the only Golden Age “Biblical Epic” (in the loosest possible sense) to spawn a sequel: Demetrius & The Gladiators, which isn’t nearly as memorable. 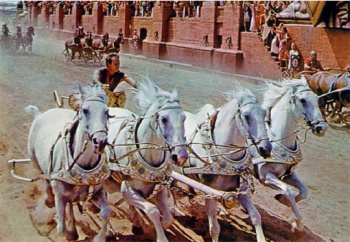 The big enchilada. When Hollywood producers, directors and investors talk about making the big movie – the one that not only earns the adoration of audiences, the praise of critics, the lifetime pass of the word “classic,” the solid-gold sheen of The Oscar AND a truly awe-inspiring pile of cash, you can sum what they’re talking about in one (hyphenated) word: BEN-HUR. Based on an 1880 novel that had been filmed at least 4 times before, it won eleven Oscars – and held that record for almost 40 years until it was equaled by Titanic (and later Return of The King.) Its set piece scene, an epic chariot race, remains one of the best action-sequences ever filmed.

The story is a king-sized reworking of The Count of Monte Cristo. Charlton Heston has the title role, a Judean noble betrayed (and then some!) by a childhood friend turned social-climbing Roman villain. Stripped of all he knows and loves and banished to the far corners of the world, Ben-Hur makes a years-long journey in his quest for revenge – along the way attaining fortune, glory and an even greater set of threats and obstacles to test his mettle.

As you’ve gleaned, it’s mostly Roman in the sense that The Empire’s globalizing reach facilitates the story and Ben’s journey, but all the touchstones are there from the pageantry to The Games to the ever-present Biblical goings-on at the margins. Throughout his travels, Ben repeatedly finds himself in “chance” encounters with a certain enigmatic Nazarene holy man – whom he ultimately finds crucified back in Judea. Depending on who you ask, the mystical finale either makes or breaks the whole production.

Kirk Douglas was not pleased when director William Wyler chose Charlton Heston for the lead in the above-mentioned Ben-Hur over him, so he decided to make his own Roman action epic. Douglas, one of the most powerful stars in the industry at the time, used his influence over the production in numerous ways, at least two of which would change the course of movie history. Firstly, he insisted that blacklisted screenwriter Dalton Trumbo be credited under his real name rather than a pseudonym – and in doing so struck one of the first major blows that would ultimately bring that shameful practice to an end.

Secondly, he was instrumental in the hiring of Stanley Kubrick – then an untested auteur who’d directed Douglas in Paths of Glory but had never helmed a Hollywood mega-production – to direct. It wasn’t necessarily a perfect fit – you can see the tug of war between Kubrick’s emerging modern sensibilities and the more traditional swords ‘n’ sandals picture the studio thought they were getting – but it gave the world a then-revolutionary new epic and earned Kubrick the accolades and clout he’d need for later projects like 2001.

Douglas stars as the title character, a gladiator/slave who becomes the leader of a slave uprising. Students of the genre (and history) will find little surprising in the actual plot – it’s the characters, the action and Kubrick’s unique vision that are the stars here. At times, it seems as though “ancient war” movies of today have spawned from mere pieces of Spartacus – a modern viewer, coming to it for the first time, might observe that it begins and ends like Gladiator with Braveheart in the middle.

Intentionally or not, Spartacus poised the Hollywood Epic for a reinvigorated reinvention, and then three years later, Cleopatra nearly killed the genre for good. To this day, the film (which isn’t all that bad, really) is still one of the icons of how not to manage a production.

The film was a star vehicle for Elizabeth Taylor, who plays the title role in a (very) loose retelling of Cleopatra’s political and romantic entanglements with Julius Caesar and Marc Anthony. The reviews were devastatingly bad, the obscenely expensive sets and costumes made studio accountants go pale, and although it was the highest-grossing film of the year, it still lost enough money to all-but bankrupt 20th Century Fox. It’s widely believed that the studio would’ve been completely obliterated by the film’s losses, had The Sound of Music not been an earth-shattering blockbuster two years later.