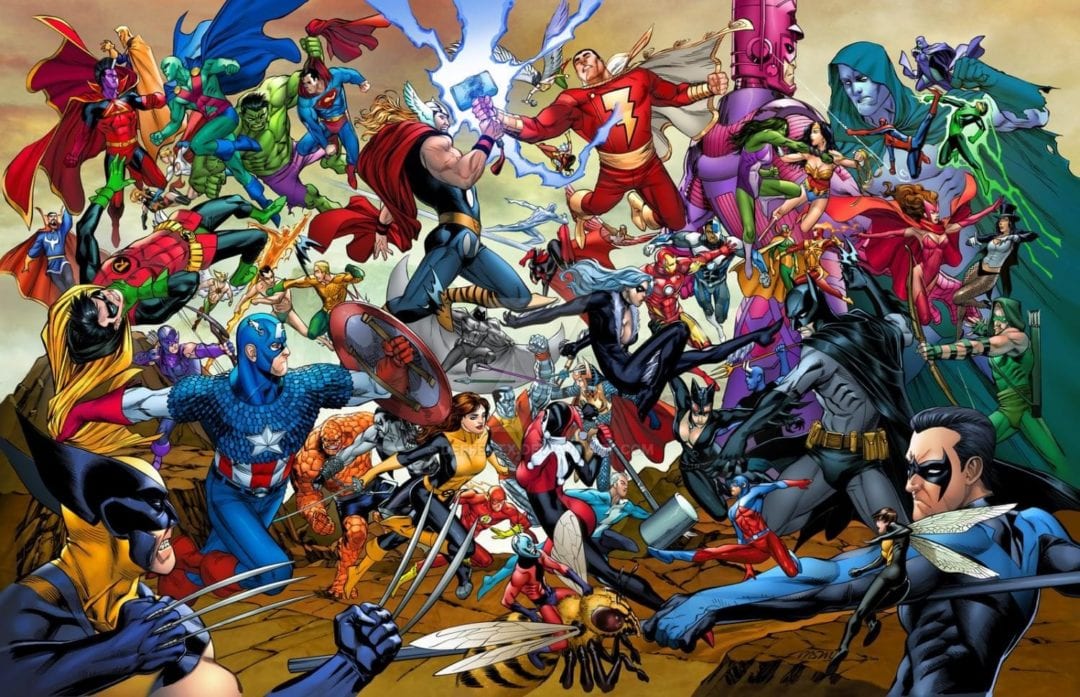 Before Microsoft vs. Apple or AT&T vs. Comcast, there was DC vs. Marvel. The rivalry between those comic book publishers is one of the fiercest ever, and it’s every bit as intense as the feuds between Superman and Lex Luthor or Batman and the Joker. Over the years, Marvel and DC have developed an extensive resume of one-upmanship, and have taken advantage of every opportunity to poach talent, copy characters or storylines, and ridicule the competition.

Despite their intense rivalry, there is at least one area in which DC and Marvel have joined forces — they are joint owners of a trademark for the term “super heroes.” I will explore this fascinating team up in two parts. This week I will explain how trademarks work, will tell the origin story of the “super hero” trademark, and will explain how it was that DC and Marvel ended up working together. Next week, I will discuss the ways that Marvel and DC have used (and abused) the “super hero” label, and will make the case for why the trademark has a not-so-bright future.

What Is a Trademark, Anyway?

As explained on the website for the United States Patent and Trademark Office, “a trademark is a word, phrase, symbol, and/or design that identifies and distinguishes the source of the goods of one party from those of others.” Trademarks are pretty much everywhere. Indeed, almost every brand name or logo is a registered trademark, and many are accompanied by an “®” symbol to indicate that the mark is registered.

The purpose of trademarks is to prevent consumer confusion and to allow companies to build and defend their reputations. Because the owner of a trademark can prevent others from using their registered mark, the trademark system allows consumers to act with confidence — when you see a golden arch, you know that you are near a McDonalds® restaurant with Happy Meals®, Big Macs®, and McFlurries®, and you know who to contact if the restaurant fails to meet your expectations.

DC and Marvel quickly realized that when it came to more general marks that did not explicitly refer to Marvel, DC, or a specific character or team neither company would succeed over the other’s objection.

In order to obtain trademark protection, one must first register the mark with the PTO. But not every mark can be registered. In order to qualify for trademark protection, a mark must be “distinctive.” Some marks are presumptively distinct. These include nonsense words, or words that have no discernible connection to the associated product (for example, Pringles). These marks are relatively easy to register (assuming they aren’t already in use by someone else), since they can serve as a unique identifier of a product, service, or brand without confusing consumers or stifling competition. On the other hand, it is more difficult to register a trademark for a word or phrase that simply describes the product or item it is associated with. In order to register such a “descriptive” mark, the registrant must show that the word or phrase has acquired an additional or secondary meaning beyond the dictionary meaning of the underlying words. For example, in order to register the phrase “International Business Machine,” IBM would have to show that consumers associate that phrase with the IBM company. Similarly, if one wanted to create a product line called “Bright Lights,” one would have to show that consumers would associate “Bright Lights” with a specific company or product line.

Of course, acquiring a trademark is not the end of the story. In order to maintain a trademark, a registrant has an obligation to ensure that the mark does not lose its distinctiveness. This process is sometimes referred to as “genericide” and it has led to the invalidation of marks for Xerox, Velcro, and Escalator, among others.

Did Marvel and DC Really Trademark “Super Hero”?  How Did That Happen?

Marvel and DC’s route to the current trademark is somewhat circuitous.The phrase “super hero” was first registered as a trademark in 1967 by Ben Cooper, Inc. in connection with a line of super hero Halloween costumes that featured both DC and Marvel characters. In 1972, Mego Corporation attempted to register “World’s Greatest Super Heroes” in connection with a line of action figures. When Cooper opposed that registration, Mego assigned its interest in the trademark jointly to DC and Marvel. Rather than opposing that powerful duo, Cooper withdrew its opposition and subsequently assigned its interest in the Super Hero mark to DC and Marvel. And with that, the alliance between two fierce rivals was born.

Interestingly, in the years prior to their joint acquisition of the “World’s Greatest Super Heroes” mark, DC and Marvel had pursued super hero trademarks of their own. For example, Marvel sought and obtained a trademark for the phrase “Marvel Super Heroes,” and DC got one for the phrase “Legion of Super Heroes,” which described a particular team of DC characters. Despite those limited successes, DC and Marvel quickly realized that when it came to more general trademarks that did not explicitly refer to Marvel, DC, or a specific character or team, neither company would succeed over the other’s objection. And so, the companies decided to cooperate and work as joint owners of the “super hero” trademarks.

That’s all for this week. Come back next time to find out how DC and Marvel have wielded their “super hero” mark and to learn about the challenges the companies are likely to face in the future. If you’re interested in a more detailed account of the history of the “super hero” trademark, I recommend you check out this well-researched law review article.