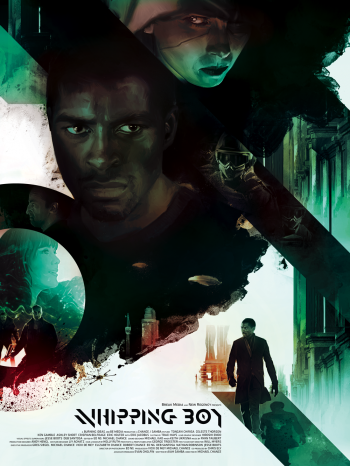 Today, you can take a peek into the minds behind Whipping Boy in our interview, where writer Aiah Samba explains where the film concept came from:

The concept spawned from an idea that we as a people are growing further and further apart. I used to always go on this rant about texting. I’m not a fan of texting and I even used to be against excessive phone calls as a kid. If I had the option to walk over to my friend’s house and meet up with him over chatting on the line, that’s what I’d do. That’s just the way I was.

So I imagined a place where we dwell in the extreme end of that spectrum. Where people don’t have a reason to leave their homes anymore because they’ve become so reliant on the newest techno gadget. Where you’re so in tune with technology but not with people, that you begin to crave contact anyway you can get it. So that led to a new fetish because… why not. Men who would go to your place of residence and allow you to pummel them into a bloody pulp. Getting all your frustrations and loneliness out in the session. They’re called Whipping Boys. And you have to understand that the Whip we follow, Napalm, is getting something out of this deal as well. He’s very much a part of this desensitized society that’s gone adrift. So by allowing the client to take all their rage of the current state of the world, out on his body, Napalm in that instance, gets to connect with them. So I loved the dynamics of such a relationship.

For more, check out our interview or go watch Whipping Boy for yourself.

Deadpool Will Get His Own Movie, Starring Ryan Reynolds

It’s Hard Out There for a (Critic)