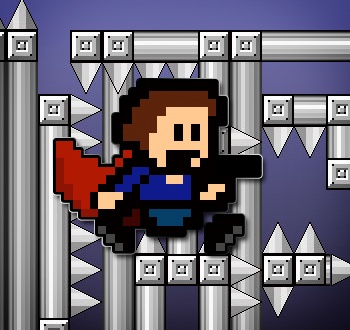 Freeware game I Wanna Be The Guy is recognized as one of the hardest games ever made – but why make a game where the sole purpose is to give the player a frustration-induced aneurysm?

One hit equals instant death, and everything is trying to kill you. The levels are filled with hidden traps that no one could predict – or reasonably avoid – meaning that the only way to proceed is sheer dogged perseverance and memorization. By the time you beat the game (if you ever do), your little tiny avatar will have died hundreds, if not thousands of times.

This is I Wanna Be The Guy, a freeware game by Mike O’Reilly, better known as Kayin Nasaki – and it’s one of the most difficult games ever made. But as Richard Poskozim asks in Issue 230 of The Escapist, what reason would someone have for making a game whose defining feature is its cruelty and lack of mercy?

IWBTG was O’Reilly’s pet project after returning to making games around 2007. The initial inspiration came after playing the ASCII flash game Owata. He decided that while Owata was hilariously difficult, it was too short and not as refined as it could have been, so he set out to make something “like that, but better.” But the motivation to expand his early experiments into a full game didn’t come until he found a test audience, whose reactions were beyond his expectations.

“I gave it to one of my friends to mess with, and he got really angry, but in a funny way, and no matter how angry he got he kept playing,” O’Reilly says. “Then it became a game of ‘how much can I piss my friend off, and have him still play the game?'”

IWBTG and other games like it are part of the “masocore” genre, a genre defined by having one purpose and one purpose alone – to make the player’s experience miserable. To read more about the masocore genre and the development of this notoriously difficult game, read “The Pains of Being The Guy” in Issue 230 of The Escapist.