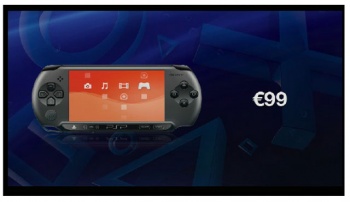 As long as you don’t want WiFi, a newer, cheaper, PSP could be yours this fall.

Sony announced a new addition to the PlayStation Portable line-up during its Gamescom press conference. Called the E-1000, this model, which will only be available in Europe, comes without WiFi functionality and is priced at an economical 99 euros. That’s just under $143 in the United States, in case you’re curious.

Jim Ryan, the new president of Sony Computer Entertainment Europe, said the system is compatible with the entire PSP catalog and features a new physical design. The E-1000 also comes in the same matte finish as the PS3 slim console, so fingerprints shouldn’t be a huge concern.

When the handheld releases this fall, several UMD titles, including EyePet Adventures, Invizimals: The Lost Tribes, and FIFA 12, will be discounted. Though there’s no WiFi, you can still connect the system to the PlayStation Store via Sony’s Media Go software.

Europeans Can Enter Amalur in Early 2012

World of Battleships Laid Down