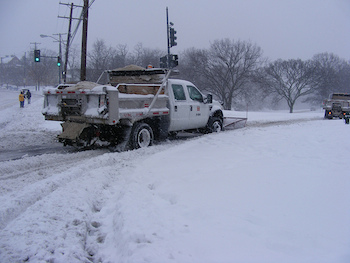 They’re taking the idea that “everything is better with cheese” to a whole new level.

Spraying the brine, which is mixed with traditional rock salt, is much more efficient than spreading salt with large trucks: A fair amount of the dry salt will bounce off the road when it hits the ground, forcing the city to use more. It’s also better for the environment, as the brine is normally discarded as waste by manufacturers.

It’s also much cheaper. Cities and states across the US have been struggling to find cheaper alternatives to spreading rock salt. Milwaukee, for example, spent $10 million on salt last year. Studies have tested the snow-melting effects of beet juice and beer byproducts, among other things. Cheese-makers are happy to donate the brine to municipalities, so long as they pay to transport it. The owner of a participating company said he saved $20,000 in transportation expenses.

While the concept seems to work well for now, officials are worried about some of the potential side-effects, including the possibility that the brine could make whole cities and towns smell like cheese.

Oh, and in case you were wondering, Mozzarella and Provolone brine are best for making snow-melting solution. According to Milwaukee public works manager Jeffrey A. Tews, they “have the best salt content. You have to do practically nothing to it.”