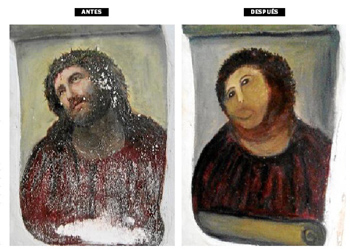 The Spanish woman who destroyed a 19th-centry fresco of Jesus while “restoring” it now wants a cut of the cash it’s bringing in.

You may not recognize Cecilia Gimenez’s name, but you’ll almost certainly know her work: She’s the little old lady from Spain who turned a century-old image of Jesus into a crude drawing of a fat Sasquatch. The reaction to the destruction cleaved fairly evenly between appalled and amused, but as the story spread, the response to her work grew increasingly generous. Memes were generated and some people even expressed appreciation for the “new” image on its own merits; thousands of “ironic art fans” signed a petition calling for the restoration to be left as-is.

It turns out that the church in which the fresco is displayed may have a more practical reason than simple irony to leave it in its “restored” condition. The painting has become a magnet for tourists and curiosity-seekers, but while visits skyrocketed, donations didn’t, which eventually led the church to begin charging for admission. That started the cash flowing, to the tune of €2000 ($2600) in just four days.

It’s a great windfall for the church, but Gimenez and her family are none too happy about the situation. They believe that since she did the work, she should get a cut of the action, so they’ve hired lawyers to demand royalties. The church has turned the matter over to its own lawyers, which is where things currently stand.

It’s pretty greasy, but also fascinating. The church and the town of Zaragoza have both taken steps to capitalize on the portrait’s surprise fame, and the economic impact has been, relatively speaking, not inconsequential. Gimenez is responsible for it, and yet all she did was destroy an old painting. The idea of claiming destruction as a form of creation is interesting (and a bit mind-boggling), but I think the truth is likely a lot simpler: greed, capitalizing on a spot of big, blind luck. A bit sad, but not terribly surprising.