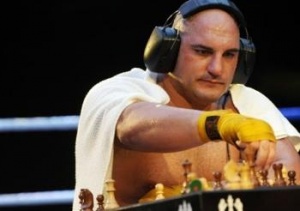 Nikolai “The President” Sazhin has been declared the World Champion of chess boxing, beating the crap out of his opponent before putting him down for the count with a fifth-round checkmate.

Sazhin, a 19-year-old prodigy widely regarded as Russia’s most promising chess boxer, holds a record of 49-13-0 along with an Elo rating of 1911, while his opponent, 37-year-old German policeman “Anti Terror” Frank Stoldt boasts an Elo rating of 1960 but came into the match with less experience in the ring, having only 25 fights under his belt. “I took a lot of body blows in the fourth round and that affected my concentration,” said Stoldt, the former light heavyweight champion. “That’s why I made a big mistake in the fifth round: I did not see him coming for my king.”

In chess boxing, matches begin with four minutes of chess, followed by three minutes of pummeling each other senseless. Competitors alternate between six rounds of chess and five rounds of boxing until a victor is declared via knockout, checkmate or points. Players can also be disqualified for violating boxing rules or taking too long to make their moves.

“This is the hard part, you are out of breath but you have to keep your wits about you,” said chess boxing instructor David Steppeler. “It is especially hard for the one who has to play first. He can easily make a false move, and in chess this is fatal. So in training we toughen people up by making them do push-ups between every two chess moves.”

Chess boxing was first envisioned by French cartoonist Enki Bilal, although it wasn’t until 2001 that the novelty sport first came to life through the efforts of Dutch artist Iepe Rubingh, who also won the first WCBO (World Chess Boxing Organization) World Championship in 2003. Stoldt captured the WCBO light heavyweight belt in November 2007 with a dramatic victory over David “Double D” Depto.

And lest you get the idea that chess boxers are just meatheads who slide pawns around on a chess board before getting down to the business of beating the hell out of one another, the top-ranked chess boxers in the world are typically rated between 1700 and 2000 on the Elo chess rating system, ranking them as “Class A” players – one step below Expert – by United States Chess Federation rules.

If this sounds like fun to you (and how could it not?) head over to the official World Chess Boxing Organization website at WCBO.org to learn more.