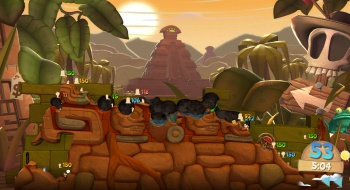 While some big-name triple A publishers might suggest that mod support is slowly being abandoned in favor of pricey DLC packs, some other developers say otherwise. Gavin Hood, Lead Designer of the latest game in the popular Worms franchise: PC-exclusive Worms: Clan Wars, says that there are no DLC plans for Clan Wars, because the game will have full mod support.

“We’ve got no plans for DLC for the game at all,” Hood told Strategy Informer, “We’re not hiding anything away. Instead we’ve got full Steam Workshop support out of the box planned for the game so people can make their own items, make their own speech banks, make Clan outfits and share all these. Post launch but within the launch window we’re going to release a Mission Toolkit, so we give all players access to the contraptions and the machiner.”

Hood confirmed that modders would also be able to make their own singleplayer missions, adding that “It seemed kind of the obvious thing to do!”

Worms: Clan Wars is being developed by Team 17, the same blokes who have been making Worms games since 1995. As the name would suggest, the online multiplayer of the game is the main focus, and Team 17 hope to hold various different league matches for different clans to compete in, in order to win trophies and medals.

The game will also have a fully-fleshed out singleplayer campaign, written by BAFTA award winning comedy writer Dean Wilkinson. I know you don’t usually think of the singleplayer when you think of Worms, but Team 17 are adamant that this time it will be worth playing.

The game will come with an iOS/Android companion app, and should be released later this year.

Double Fine: Massive Chalice’s Permadeath Will Be “Tough But Fair”