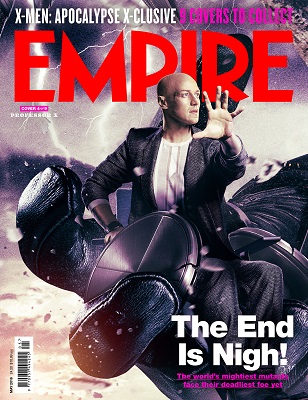 On the off chance the “Apocalypse” subtitle didn’t clue you in, X-Men: Apocalypse (especially if recent trailers are any indicator) is probably going to include some heavy and bombastic content. Its director, Bryan Singer, has gone so far as to compare it to a blockbuster disaster flick. That in mind, it’s not hard to see why many X-fans and moviegoers are getting amped up for it. The world falling to pieces on the big screen is always a draw. The world falling to pieces while mutant warriors blast each other to bits? That’s straight-up visual candy.

Hoping to draw in excited fans, Empire has recently unveiled a series of variant covers focusing on different members of the film’s cast. There are nine covers in total, each featuring a high quality image of a main character or character pair. Driving home the high stakes of the film, each cover also promises, in bright bold lettering, that “The End is Nigh.” The Apocalypse issue of Empire will go on sale on March 31st.

While all of the covers are cool, the one that has me the most curious is the cover focused on Charles Xavier. While there have been a few glimpses of bald Xavier in trailers, Professor X has, in most of what we’ve seen, still been shown with a full head of James McAvoy hair. The Professor X Empire cover, comparatively, showcases the character in all of his classic cue ball glory. It leaves me wondering exactly what’s going to happen to finally rob him of his locks and how much bald Professor X we’ll actually see in the film. We’ll find out on May 27th when the X-Men: Apocalypse finally hits the big screen.

Allegiant – Sets Up Dominoes to Knock Down Next Year