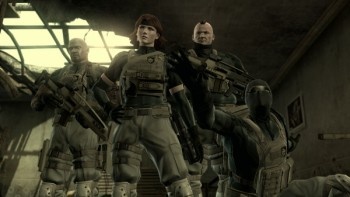 File this one under “no great surprise:” Microsoft’s John Schappert says he’d love to see Metal Gear Solid 4 on the Xbox 360, and claims the system would have no problem handling the game.

The “MGS4-to-360″ saga has been filled with rumors, doubt, denials and fanboy rage, brought to a new boil yesterday by the news that Konami PR man Yoshitaka Arai claimed the company was investigating the possibility of porting the hit game to the Microsoft platform. Arai’s words contradicted those of SCEA chief Jack Tretton, who said in July the game would be impossible to play on a system without Blu-ray capability, as well as Metal Gear Solid creator Hideo Kojima, who declared a month later than an Xbox 360 version of the game “is probably not possible.”

But Schappert, Microsoft’s Vice President of Xbox Live, claims there should be no major technical impediments to bringing the game to the 360, and predictably says he’d love to see it happen. “I’m certainly in the fan club that would love to see Kojima-san’s masterpiece come our way,” he told MCV. “It would be wonderful to play Metal Gear Solid on the Xbox. It could become another of the many franchises that started their life on another console that are now coming our way.”

“I can’t speak on behalf of Konami, but I can shed more light on the fact that we definitely have the power to run MGS4,” he continued. “There are a lot of recent examples that are in true high-def on our platform and aren’t on PS3. We’ve got an amazing amount of horsepower and graphics power.”