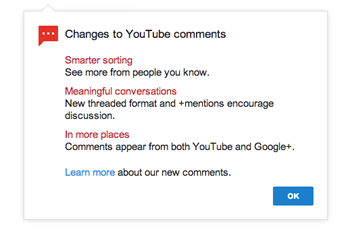 Beginning this week, YouTube comments will start to look a little different. Instead of being displayed chronologically, comments will appear by relevancy in a change Google is calling “conversations that matter to you.” Working with Google+, YouTube comments from the video’s creator, “popular personalities, engaged discussions about the video,” and people in your Google+ circles will move to the top of comments. Commenters will be able to choose to post publicly or privately, and video creators will have more control over moderating comments.

Google and YouTube have wanted to tweak the comments system for a long time, but it was not possible until Google+, unifying all Google services, including YouTube, under one account. With the change, the display of YouTube comments will be personalized to each user, according to YouTube product manager Nundu Janakiram. Two people may see different comments at the top than another person would.

“At a high level, what we’re trying to do is to surface meaningful conversations for a particular viewer,” Janakiram told The Verge.

Last year Google began asking YouTube users to use their Google+ accounts to log in to YouTube, linking the two accounts together and reducing anonymity. Video creators who have linked their YouTube accounts to Google+ and enable discussions on their channel page will be the first to use Google’s redesign. The redesign for the entire site won’t be available until later in the year.

Thralled Slave Drama Enthralls, As It Edges Towards Completion

Win a PS4 by Eating at Taco Bell