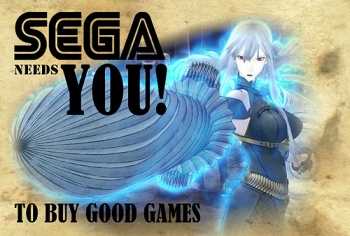 Thanks to an aggressive word-of-mouth marketing campaign, a limited time price drop and the release of downloadable content, sales of Sega’s Valkyria Chronicles increased by 400% in April, a full six months after the game’s launch.

In an unbelievable turnaround worthy of the last third of the climactic match in a Rocky flick, Sega’s cult-hit strategy-RPG, previously assumed to be a sales dud, has more than quadrupled its sales in recent months. This doesn’t make it a blockbuster – it ain’t Halo, people – but it’s one hell of a comeback kid.

“In the month of April alone, Valkyria Chronicles sales in North America increased by over 400% from March sales, skyrocketing the game into best-seller lists, off of store shelves, and into the homes of tens of thousands of brand new owners,” Sega said. The company went on to say that having a game enjoy such success so long after launch is “a feat that few games can ever boast.” You can hear the Cristal popping in the background, can’t you?

So what’s the deal? Did people suddenly have a mass craving for Japanese strategy-RPGs that take place in alternate history WWIIs and feature painterly graphics? Not exactly. Sega credits the sudden success of the game to extensive marketing and community efforts on multiple fronts – contests on various sites, Facebook and Twitter rallying, and more. Not to mention a price drop to $30, which Sega describes as inciting copies to fly “off the shelves like delicious hotcakes at a protest against weight watchers.”

“There may be no louder testament to the power of a hardcore fanbase and continued support from developers and publishers than this,” the company declared. “We know exactly where the credit lies – and that’s with all of you guys in the community.”

Feel the love, Valkyria Chronicles fans. There are apparently a few more of you now.