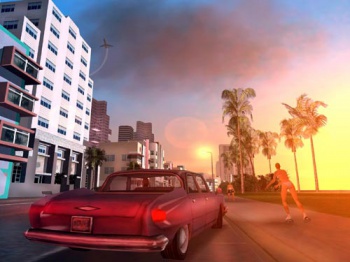 It’s time to take a trip back to the 1980s… or 2002, when Grand Theft Auto: Vice City was released. Originally launching on the PS2, it eventually made its way to the Xbox, PC, and Mac, and will soon be able to add a variety of mobile platforms to the list. To celebrate Vice City‘s tenth anniversary, Rockstar is releasing it on iOS and Android platforms later this fall.

Details are scarce at the moment, and there wasn’t a list of specific phones and tablets supported in Rockstar’s announcement. Rockstar’s Sam Houser called Vice City “one of the most iconic and vibrant settings ever realized in a game” and “a defining moment in the series,” stating that the iOS and Android release will be “a stunning, updated version for phones and tablets.”

The press release didn’t specify what additions would be made to the tenth anniversary edition of Vice City, but did promise “native high-resolution graphics and several enhancements.” Grand Theft Auto III also received an iOS and Android release for its tenth anniversary late last year, so it’s not surprising that Vice City would follow in its footsteps. What’s really strange is that a game that seemed impossibly big just a decade ago can now fit on our phones.