A classic RPG quest setup: You need to get the Knickknack of Awesome, which is in the hands of King Bob. In exchange for the Knickknack, Bob wants you to rescue Princess Nancy from another kingdom. Because he’d rather not start a war, he’d prefer if you didn’t kill a bunch of prison guards in the process. So we have a quest with loot, risk, travel, and optional goals. If this were an old-school RPG like Fallout or Planescape Torment, then we’d probably have many, many ways we could approach this challenge:

That’s a lot of options, and players can have a lot of fun running through the game again and again, experimenting with different actions and seeing what the NPC’s have to say. Roleplayers will approach the quest by asking themselves, “What would my character do?” Other players will just do whatever sounds like fun. “Stealth mission? Awesome!” And others will just look for whatever route gives them the greatest mechanical advantage. “If I wipe out the guards, I can make a fortune looting them!” The game is able to appeal to a lot of different play styles and moods.

But if we were talking about a more modern RPG like Oblivion or Fallout 3, then this quest is likely going to be a lot less flexible. On the back of the box the game might brag about how you’ll have all kinds of choices to solve problems the way you want, but in the end your options will boil down to:

Maybe the two routes will have a good /evil bent to them, and maybe you’ll sometimes get a third option, but in general the days of inventing our own solutions to freeform quests are gone. Usually the game world will be “hardened” against the player by making certain NPCs (like Bob and Nancy) invincible. Some doors, no matter how flimsy, will be indestructible and have an unpickable lock. And Nancy won’t appear in the prison cell until Bob tells you to rescue her. Now the game is less about inventing your own solutions to problems and more about just doing what you’re told.

While the newer games supposedly evolved from the older ones, they have very little in common at this point. Usually when a genre changes radically fans will blame it on the designers “dumbing down” the game for a wider audience. But in this case I think the culprit is technological advance: I think games have been simplified because of voice acting. If the game is all in text, then King Bob can have dozens – maybe even hundreds – of different lines of dialog to respond to all of the possible player actions. If the game is fully voice acted, then this is completely infeasible. Voice acting might not be the only reason games are offering less freedom, but I think it’s a major culprit. Going back twelve years or so you can see the trend: The more voices we get the more linear games get, because having both at once is too danged expensive. 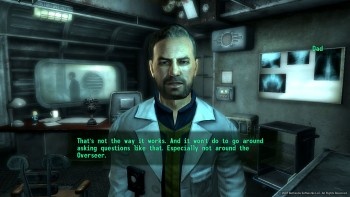 If you’ve ever watched any behind-the-scenes videos of voice actors doing their thing, you know that the job is a lot more complex than just reading stuff. To make the performance work the actor must be coached so they understand the line in context. They might do several takes. The process involves several people and some very expensive facilities, and there’s a limit to how much of it can be done in the typical game development cycle.

Things get even more thorny later on. During testing, someone will discover that if you steal the knickknack, rescue Nancy, and then talk to Bob, his response won’t make any sense. The designer who scripted this quest didn’t allow for this outcome, and now the quest needs some extra dialog. If this was a text-driven game, then fixing this is a matter of writing a few new lines and dropping them in. If this is a voice-acted game, you need to call the voice actor and get him to come back and reprise his role. Hint: Actors aren’t going to want to make that trip if you’re only offering to pay them for ten minutes of work. Do we want to pay the actor for another whole day to record one line of dialog that less than 5% of all players are likely to encounter? No? Then screw it. Just wall things off and make it impossible for the player to do that.

But here is the kicker: Watch anyone play these fully-voiced RPG’s, and you’ll see they click right through the voice acting. People can read a lot faster than they can talk, and so players end up hearing just the first six words of every sentence. Unless the actor is Patrick Stewart or Liam Neeson, people aren’t going to sit still while an NPC rattles on. We’ve lost so much in the way of freedom and depth, and in return we’ve gained voice acting that everyone is in a hurry to skip.

The thinking is that voice acting adds to the immersion of a game. And while that’s true during certain epic, plot-centric moments, in general the voice acting can really get in the way during the 95% of the game that isn’t driving the main plot. It really shatters immersion when you walk down the street and hear the exact same voice coming from a beggar, the town guards, an aristocrat, a shopkeeper, and a shiftless dock worker.

I really liked how voice acting worked in Planescape Torment and Morrowind. Generic folks would be all text, but main characters would greet you in voice so that you could get a sense of who they were. Their introduction would tell you if they were gruff, friendly, arrogant, a schmooze, or a moron. Then the rest of the conversation would happen in text. The neat trick is, the player will naturally read the text in the given voice. Thinking back, I remember all of the dialog as if it had been fully voiced, even though I just read most of it.

I certainly wouldn’t want to go back to the days of all silent characters. Voice acting brought a lot of vibrancy and depth to our gameworlds, and once A-list talent started voicing our heroes things only got better. But that last push to give voice to every single line of dialog had the tragic effect of making these games a lot more shallow and a lot less interesting.

Shamus Young is a toothless old codger who is always muttering about how things were so much better in the old days before videogames were ruined by your newfangled joysticks and your decadent color televisions.