I feel a strange motivation to unthinkingly defend Duke Nukem Forever. It’s the same mindless instinct that makes me offended when people talk shit about the UK, even though I don’t live there anymore because it’s a grey, flat, miserable place more hung up on its past glory than William Shatner. I guess because Duke Nukem 3D was an important fixture in my teenage emotional development, which probably explains why I still greet women by tossing them fivers.

A lot of people have condemned Duke Nukem Forever for being “immature.” No more so than Duke Nukem 3D was, really, and importantly I suppose most of the people making that complaint were, like me, teenagers when they first played Duke3D. It’s like a fifteen-year-old complaining that the shows they have loved for years have gotten too childish – hey, they’re not aimed at you anymore, slick. Perhaps we should solicit the opinion of a thirteen-year-old. Although they’d probably complain that the game seems to be attempting to get by off nostalgia for a period that was before they were born, and that the whole business with the captured women in the alien hive was giving them nightmares.

But it brings up the subject of maturity. Certainly it seems like half my professional existence is spent on some level trying to persuade people that games are becoming more mature all the time. But there are various interpretations of the word “mature,” and it’s a paradox I’ve noticed before that a lot of games that receive “mature” certificates would only be of interest to twelve-year-olds.

I first wanted to talk about this after doing Mortal Kombat, and it’s no new observation that it features absolutely ridiculous levels of gore that carries absolutely no weight whatsoever, like action figure make-believe in a bucket of offal. But what really communicates to me that it was created with a completely immature mindset is, brace yourselves, the fact that there aren’t any cocks. Whenever one of those demented X-ray attacks unveils the muscular system around a character’s crotch, the action figure comparison continues in that they’re all smooth around the bend. No Kevin Bacon Hollow Man are they. Not that I’m saying that being able to ogle Sub-Zero’s fat juicy combat boner would significantly improve the quality and tone of the game, but it is indicative of the attitudes involved that you can have all the unflichingly realistic gore in the world but the moment you want to extend that realism to full sexual anatomy then all the little boys shy away with red-faced titters. What are you, gay?

Interesting, isn’t it, how violent games never flinch at themselves or spark much controversy (not these days, anyway) but sex, an act of love, is what terrifies people. Easy to say we’re free of repressive conservative attitudes but less to hire a cock jiggle programmer.

Another game that brought the issue of maturity to the forefront of my mind recently was The Witcher 2. A game that I’d love to be able to like, but I just can’t get past how stuck up it is. Anyway, one of the iconic features of the first Witcher game was that there was a collectible sidequest based around notching your bedpost, wherein you acquired a nudey picture of a female character when Geralt successfully bones her (perhaps a close-up picture of Geralt’s new venereal disease would have been more appropriate), which isn’t a mature attitude to sex at all, but the Witcher 2 was improved in that respect. Very early on in the game Geralt wakes up with a naked lady, but what impressed me was that there was no fuss made about it. Here are some titties, it seemed to say. We’re not coyly hiding them behind some kind of Borat-style one-piece that has apparently been superglued over the nipple. 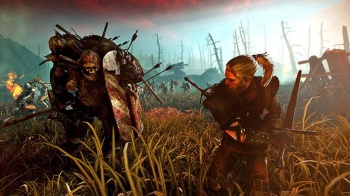 This is starting to sound like my definition of a mature approach to sex is to have every character run around with their bathrobes hanging open, so let’s discuss the other side of the censor-frothing coin, violence. What games have a mature attitude to violence? That is, depicts violence with weight and appropriate consequences? Well, very few of them, obviously. The only one that really springs to mind is, as ever, the self-mutilation scene from Heavy Rain, where you have to spend an entire afternoon preparing tools and downing painkillers and it still looks like it stings like a bitch.

My point is, the ratings system is extremely flawed when it would put the pencil scene from The Dark Knight in a softer category than half the stuff that goes on in Mortal Kombat, when the former is actually quite horrific and the latter is just goofing around with some red squishy objects. Approach to censorship tends to be a very mechanical one – you get bumped up a rating if you go past a certain number of swears or depict, say, a fork going into an eyeball with very little consideration of context – and I’m wondering if there doesn’t need to be some critical re-examination here. In the same way I don’t give review scores because I can’t summarize a detailed critique of a game numerically, you can’t warn people what kind of cultural level mature content is operating on just by stating how old you have to be to not have nightmares about it afterwards.

So here’s what I’ve come up with. Instead of an age rating, the covers of games should depict a character from literature whose mindset you’d most need to sympathise with in order to get the most out of the product. So if a game was about fun violence like Mortal Kombat it’d show John Carter of Mars, but if it was about dramatic violence like Heavy Rain it’d have Joseph Yossarian from Catch 22, or Billy Pilgrim from Slaughterhouse Five or someone from some other miserable war-related book. And it’d work for films, too. Fight Club would have Holden Caulfield. Death Wish would have Edmond Dantes. And The Human Centipede would have Patrick Bateman. In fact, this rating system would work for anything except books, because in that case you’d just have a picture of the protagonist from the same book.

But even this concept is a flawed one that relies a little too optimistically on the general public’s knowledge of classic literature, so allow me to also present my preferred option: fuck it. As in, don’t have ratings at all. Grown-up fun only interests children because we deny it to them, they wouldn’t care if we didn’t. If your child really wants to see A Serbian Film then you should just let them, by the same principle by which you’d make your curious offspring smoke an entire carton of cigarettes or force them to have sex with a disease-ridden whore to scare them straight and teach them an important life lesson. Now, admittedly this is a policy that ultimately leads to children suffering emotional scarring or even death, but there comes a time when you have to stop letting that sort of thing bother you, generally when you’re riding the bus home at around the time the schools close.