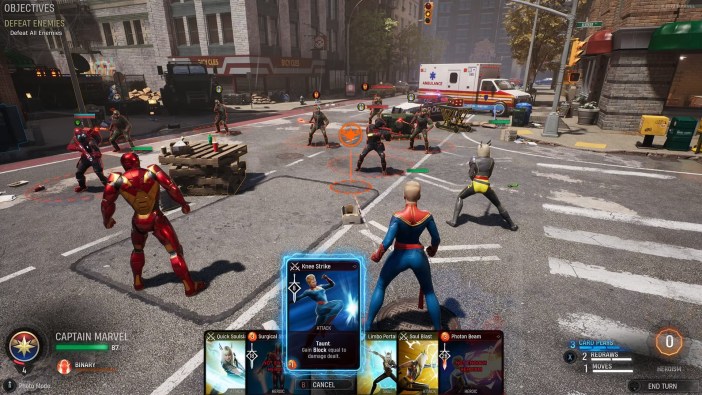 Over the past several years, Firaxis rebooted the alien-busting XCOM series, but the game we’re talking about today isn’t simply XCOM with superheroes. Rather, Marvel’s Midnight Suns is essentially a turn-based tactical RPG with card-driven combat.

Granted, Firaxis’s own description is a little more elaborate, calling it “the ultimate crossover event combining the rich story, character relationships, customization and progression of an RPG with the tactical strategy and combat mechanics of a revolutionary new card-based tactics game,” but it’s still the same blend of genres.

Marvel’s Midnight Suns features turn-based, third-person battles where your team of superheroes takes on the forces of evil. But instead of ducking behind cover and blasting away at foes, you use attack, skill, and hero cards to bring your enemies down. That’s where the card battler mechanics come in.

As for the RPG elements, those typically come into play outside of battle, usually at your home base. You get to level up, talk to your teammates, hunt down magical ingredients, and more. Those activities aren’t absolutely compulsory, but they’ll make the game’s combat sections less challenging.

You can’t romance the other heroes, but making friends with them will pay dividends in combat. And there are other secrets and bonuses to be uncovered, provided you’re prepared to hunt for them.

So, to explain what type of game it is, Marvel’s Midnight Suns stitches together three genres: RPG, turn-based strategy, and card battler, but you’ll be too busy having a blast to notice the seams.