So, in case you hadn’t heard, actress and Miss Israel 2004 Gal Gadot – known the world over for her incredibly memorable role as “The one who isn’t Michelle Rodriguez, Jordana Brewster or That MMA Chick From Haywire in the Fast & Furious series – has been officially cast as Wonder Woman opposite Ben Affleck’s Batman and Henry Cavill’s Superman in the upcoming sequel to Man of Steel. Well… technically what seems to have happened is that Warner Bros. opted to reveal that the role she had already been cast in a few weeks ago was Wonder Woman (which may or may not have been intended to be held back as a surprise) because the entertainment press went gaga with trend-pieces about a record-setting Thanksgiving boxoffice utterly dominated by a pair of female-led (and largely female-targeted) blockbusters putting to lie the industry’s assumptions about gender and ticket sales and they (Warners) decided to get out in front before the story morphed into another round of “Where is Wonder Woman?” write-ups.

So, there you go. The First Lady of comic-book superheroes, created in 1941 by eccentric inventor/psychologist/feminist-theorist William Moulton Marston, will make her first-ever live-action feature-film debut… in the sequel to somebody else’s movie.

Oh well, baby steps. If nothing else, this seems to be yet another instance wherein Henry Cavill’s Superman is slipping to the sidelines of his own relaunched franchise – if you thought Affleck’s Batman was going to come under fan/media scrutiny, you haven’t seen anything yet. However you feel about the character, Wonder Woman is (symbolically) massive – to this date just about the only prominent female superhero that pretty-much everyone can name who isn’t a “the girl” on a predominantly male team or the distaff-counterpart to a male hero.

Even with nothing else known concretely at this point outside of her presence and the name of the actress taking up the mantle, said presence inspires a whole host of questions. Here are five:

How long has this been planned?
In my line of work, you hear things all the time about movies in-production. Gossip, rumors, tales out of school, etc. Most of the time you keep them to yourself, because if they’re true you might get someone in trouble and if they’re false your own credibility is on the line. So in the interest of covering both bases and bums… let’s just say that the production of Man of Steel’s sequel seems unusually reminiscent of the issues that plagued Iron Man 2; namely that the film may have headed into production with only a very basic idea of where it wanted to go plotwise and a lot of room left to be filled by (among other things) “worldbuilding” for other related movies.

It’s been whispered, for example, that while overtures to a bigger DC Universe were always part of the plan, the film didn’t become a Batman/Superman team-up vehicle until shortly before that direction was announced SDCC. Rumors about easter-egg cameos for the likes of The Flash and Wonder Woman in their civilian identities (to be paid off in future films) started to bubble up a few months ago – which is also the first time Gal Gadot’s named started being bandied about for “an unnamed female supporting role.”

It would not surprise me one little bit if this really was planned as just a wink-wink cameo reference for fans (“My name is Diana.” ::extends hand, briefly exposing part of a LARGE METAL BRACELET on her forearm::), blossomed into a big Justice League-teasing reveal and is now being upgraded to a role of some significance now that the pressure is on for bigger parts for women in this genre.

How big is her role?
Of all the guesswork I’ve been doing about this project between Wednesday and right now, this is the informed-assumption I am the most confident about making: Wonder Woman (as opposed to “a minor character who might turn out to be Wonder Woman in a later movie) was not part of the plan for this movie when Batman’s co-lead presence was announced back at SDCC. Because if it was, there’s no way they wouldn’t have revealed it right then and there – it would’ve been the equivalent of announcing Justice League in all but name; and would’ve turned Diana-fancasting into The Internet’s favorite hobby for the rest of the year.

More likely, the idea of putting her in either as a climactic reveal, a sideplot or maybe even just a post-credits stinger formed later – meaning that, however “important” the role, she wouldn’t have much in the way of actual screentime. After all, one of the biggest advantages to a character being this iconic: you could very well simply have her “show up” in her signature uniform (with or without having appeared looking “normal” earlier) and start kicking ass and almost nobody who would’ve gone to see this in the first place is going to be “confused” as to who this person is.

But now that they’ve gone and made a “news day” out of this, it would be received as something of a letdown if she didn’t at least have a role roughly equivalent in size and import to, say, Anne Hathaway’s Catwoman Nickname-Deprived-Goggle-Enthusiast-Thief Selena Kyle in The Dark Knight Rises. That means this movie might be close to being on the “crowded” side of things. And hey, speaking of which… 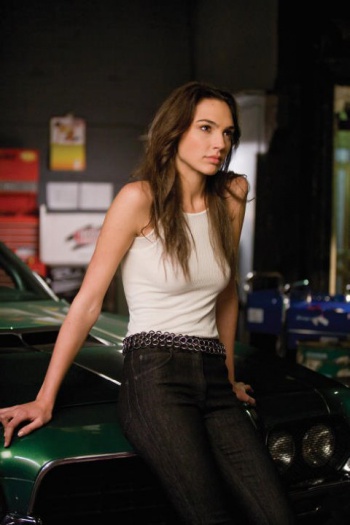 What is this movie actually about?
Unlike, Marvel Studios (and now parent Disney) Warner Bros. hasn’t already mapped out and set in motion definite plans for a multi-film, “chapter-narrative” driven DC Universe. But there were a good deal of sequel seeds being planted in Man of Steel: The LexCorp logos, the Wayne Inc. satellite, the coincidence of Metropolis being exactly where Zod needed to put one half of his surprisingly-uninteresting planet-crusher machine, Kryptonian spacesuits being (unmistakably) similar in design to Lex Luthor’s Bronze Age Power-Armor, etc.

If you had to guess out a sequel based on that, one could easily imagine a plausible storyline: Lex Luthor as a secretly-evil industrialist rebuilding Metropolis bigger and better (in the comics, the city is often depicted as semi-futuristic and nicknamed “The City of Tomorrow”) while covertly building nasty stuff (like power-armor) out of salvaged Kryptonian tech and sewing mistrust against Superman for being an alien and bringing this disaster to Earth; possibly with Bruce Wayne turning up at some point to talk about justice and leagues and such. Based on what little can be gleaned from statements by Zack Snyder and David Goyer, I get the sense more than a little of that actually A.) was the original plan and B.) will still make it in. What it doesn’t explain is what interest (or function) a nigh-immortal Amazon Princess would have in any of that. Three plausible ideas jump immediately to my mind:

Wonder Woman is Nick Fury: As a super-powered figure who has (presumably) been around longer than Superman has, she’s aware of some looming threat and is here to start recruiting others for a group effort.

Wonder Woman is another alien or an augmented human of some kind, brought into the open by events of the previous movie: One of the reasons Warner Bros. has never made the solo Wonder Woman movie is that she’s considered too bizarre by many who’ve tried. Would you put it past this production team to decide to “streamline” her origin as something that can be knocked-out as the B-story in this sequel? I wouldn’t.

Wonder Woman is Bella, Superman is Edward, Batman is Jacob: Don’t think this didn’t occur to anyone at this studio – these are the people who made Green Lantern.

What is this movie called?
We’ve been calling this yet-unnamed project Superman vs. Batman for really no better reason than Warner Bros. spent a decade trying unsuccessfully to get a project with that very name and premise off the ground. Yes, there’s also the detail that – in lieu of a trailer or casting news – they announced the project by having Harry Lennix read an antagonistic passage from the climax of Frank Miller’s The Dark Knight Returns. But there hasn’t really been anything to definitively suggest that the two will actually be enemies in the film.

Sure, they probably won’t get along right away for drama’s sake… but there’s nothing that says this has to be a feature-length physical conflict other than a certain stripe of fan’s fixation on seeing the dopey 90s Dark Age “Batman always somehow wins because angst and preparation and because BATMAN!” trope play out in live-action. If this is going to be (at least on some level) a three-piece act, there’s even less rationale to go that route – plus, the “Why doesn’t she get her own movie instead of a guest spot?” backlash has already started, and leaving her name out of a title made of names would just call attention to that.

Long story short: I wouldn’t be surprised to see this wind up being called World’s Finest or Trinity in the final outcome; possibly even without the accompanying Man of Steel header since, now more than ever, it seems like we’re building more toward SETUP FOR JUSTICE LEAGUE: THE MOVIE moreso than a specific continuation of the new Superman’s story.

What will she look like?
I’m not even going to touch the… “complicated” nature of image and casting called into question by the “Is Gal Gadot too thin?” body-snarking that hit in the immediate wake of the announcement. No interest in that minefield right now, thank you very much.

As for costume? Who knows. There are rumblings that Affleck’s Batman suit is actually a significant step away from the armored look that has plagued that character for decades of movies, but I’ll believe that when I see it. Assuming they aren’t junking the overall aesthetic from Man of Steel, (I’d love to see that, just not going to hold my breath) I’d lean toward a muted blue (or black) and red scheme, probably silver instead of gold like the first New 52 design. I’d like to think I can count on Snyder to at least keep the bare legs/shoulders and strapless low-neck chestplate look… but I wouldn’t put money on it.