This article includes spoilers for both the movie and the comic book Kick-Ass.

The things that are supposed to set us off as a culture tend to change over time, and not always in a linear fashion. The 1930 film Morocco caused a culture-shattering sensation when star Marlene Dietrich strode onto a nightclub stage in a man’s suit, complete with top hat and pants – itself a major taboo at the time – then sauntered out into the audience to plant a mouth-to-mouth kiss on a female patron. Yeah, really. In 1930. See for yourself. Staged in the same manner today, the scene would still draw disapproving tongue-clucks from the back rows, but now they’d be objecting to the way Dietrich – and everyone else in the room – gleefully puffs away on their cigarettes.

Other things, though, are constants: No matter how tame or extreme movie violence has ever been, it’s always been too much for some people. Especially certain kinds of violence – or, rather, violence done by or to certain kinds of people. Violence against people perceived (fairly or not) as being less able to defend themselves – usually meaning women and children. Sometimes, you could maybe get away with one or the other. The Golden Age of Hollywood is littered with damsels in distress being thrown to and fro, and young boys have dished out and taken plenty of cinematic lumps over the years – 1944’s Tomorrow The World features a pre-teen Hitler Youth cadet who tries to murder his same-aged adopted cousin and pays for it with a righteously-violent beatdown at the hands of his American classmates.

But mixing both, as in violence involving female children? That’s almost always “too far,” and if it’s done at all it’s usually to take advantage of the assumed edginess of the material, a conceit that took its ultimate form in The Exorcist, where the premise of demonic possession allowed for the unleashing of taboo-horror incarnate: A little girl who endures (and delivers) horrible mutilation, curses like a sailor and at one point sexually mutilates herself with a Crucifix. (Speaking of things you couldn’t get away with in a modern movie…)

And there you have it: What’s the ultimate, consistent hot button taboo of movies? The mixing of violence and young women. Or, summarized in two words:

The R-rated action-comedy Kick-Ass, – reviewed on Escape to The Movies last week – is about a teenage boy who tries to become a real-life superhero, which primarily earns him a succession of increasingly more savage beatings. But the star attraction has turned out to be one of the supporting players: Chloe Grace Mortez’s “Hit-Girl,” ostensibly a bubbly 11 year-old girl but actually a vastly more proficient real-life superhero, trained by her father “Big Daddy” (Nicolas Cage) in the arts of lethal combat to help him exact a personal vendetta against a vicious crimeboss.

Clad in a leather and kevlar costume, Manga-esque purple wig and omnipresent plaid skirt, Hit-Girl gets three of the film’s major action scenes more or less to herself, and all three turn on the same axis: A ridiculously well-armed little girl murdering whole teams of adult men with an arsenal of swords, knives and guns. She also gets almost as good as she gives: She’s shot point-blank in the chest at least three times, and when going up against an equally combat-proficient adult hand-to-hand in the climactic battle, she gets slammed around like a rag doll – with a brutal roundhouse to the face serving as one of the all-time most effective “by the way, the hero isn’t invincible” gut-punch moments I can remember. 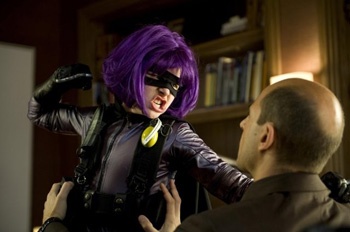 Oh, and she also swears. A lot. It’s as though someone started designing the character by compiling a checklist of “stuff involving young girls that will make people freak out” and going on from there. (Given that she owes her inception to superhero-shock specialist Mark Millar, that actually wouldn’t surprise me.)

In Millar’s original comic series, Hit-Girl is essentially a tragic figure: In that version, Big Daddy’s vengeance-seeking fallen cop origin is ultimately revealed (hey, I warned you right at the start) to be a lie – he’s just a comic-obsessed middle-aged loser who kidnapped his own daughter and fabricated their mission against the mob because he thought superheroism would be better than a boring normal life for her (the comic is essentially a mean-spirited satire of comic fandom, with the “real-life superheroes” as caricatures of various ages and levels of overly-devoted fandom.) “Rescuing” her – in a roundabout way – from that life is Kick-Ass’s sole act of real heroism.

In the film, Big Daddy’s heroic origin is for real – though his obvious psychotic derangement still comes through loud and clear – and so Hit-Girl and the rest of the film take on a slightly different tone. Though much less cynical, from a certain perspective it could easily be seen as much more subversive and morally complicated. Millar’s comic revels in exaggerated tableaus of “grim ‘n’ gritty” superhero gore while unsubtly reprimanding the audience for enjoying such things. Matthew Vaughn’s movie, on the other hand, serves up the slaughter but dials back the self-aware release. Where the comic excuses itself from uncomfortable questions about what sort of mind invents Hit-Girl in the first place with a wagging finger, the movie nudges us to admit the troubling truth that even though we know she’s creepy and wrong, she’s also pretty damn cool.

Amusingly, her innate coolness probably springs from the same set of protective instincts as the natural revulsion of seeing her hurting enemies and being hurt herself. We don’t like seeing the helpless in peril, but we love seeing the underdog triumph. What throws our reactions a bit out of whack, however, might be that – until the finale, anyway – Hit-Girl is never helpless. She’s a one-girl army, and her approach to crimefighting looks objectively less like the work of a Teen Titan than it does the work of Jason Vorhees. Far from adhering to strict self defense, she caps off her introductory battle by skewering a drug dealer’s girlfriend with katanas and tortures a mob informant in an industrial car crusher.

Maybe that’s what really bothers some of the film’s angrier detractors – though perhaps not in a way that is immediately apparent to them. Hit-Girl might just be a little too strong. Few things have traditionally provoked as knee-jerk a reaction in Western popular culture than the notion of a woman – of any age – stepping outside her traditional subservient role (like I said at the beginning, Dietrich set the 30s ablaze by wearing slacks). Hit-Girl, at least in the movie, is many things up to and including a homicidal sociopath, but the one thing she isn’t is a victim. (In the comic, of course, she’s very much a victim – namely of the fraudulent Big Daddy’s psychological abuse.) 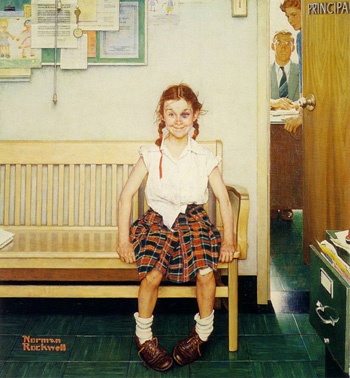 Mind you, I’m not trying to pull a cutesy-poo “no, it is you who are the misogynist!” turnaround on the folks who have a genuine discomfort with a preteen girl killing people with throwing knives and getting thrown through tables. But I do think it’s worth pointing out that similar acts of brutality don’t seem to draw quite the same reactions – derogatory or enthusiastic – when they’re done by male children. The Patriot features middle school aged boys taking sniper shots at British soldiers, and the underrated PG family flick Baby’s Day Out has a scene where an infant sets fire to a kidnapper’s testicles.

And yes, I recognize that a big part of this character is that she’s supposed to make the audience uncomfortable, and not just in terms of the violence. While she’s not anywhere near as edgy as, say, Natalie Portman in The Professional, there’s a small undercurrent to the character that reads like a dark parody of the “violent women are hot” cliché that tends to crop up around female superheroes. (“I think I’m in love with her!” blurts out one of Kick-Ass’s geeky buddies, who then only half-jokingly vows to “save himself” when reminded of her age.) If nothing else, the purple wig and plaid skirt could be seen as reference a certain not-entirely-innocent archetype of the Anime/Manga scene, which, these days, is where a girl her age is more likely to draw her superhero inspiration from, as opposed to Kick-Ass’s unironic Spider-Man parroting, or her father’s vocal channeling of Adam West once his mask goes on.

In the end, all this conflicting unease is what’s made Hit-Girl – despite Kick-Ass‘s less-than-earthshaking performance in terms of actual boxoffice – thus-far the character of 2010. If there’s a button, she’s pushing it – probably two or three at a time: Violence against children? Violence by children? Women with too much toughness? Check, check and check.

I’ve seen articles and commentators weighing in on this character from angles as varied as outrage at her very existence, worried concern that irresponsible parents will mistake her (and thus the film) for family fare, ironic bemusement and even effusive feminist praise in the form of “if only there had been a character like this to look up to when I was that age!” Hit-Girl exists in a hazy middle ground between exploitation, empowerment and satire, all of which just goes to show that it’s never impossible to have themes, characters or even ideas worthy of serious discussion in a genre movie – even one with a title like Kick-Ass.