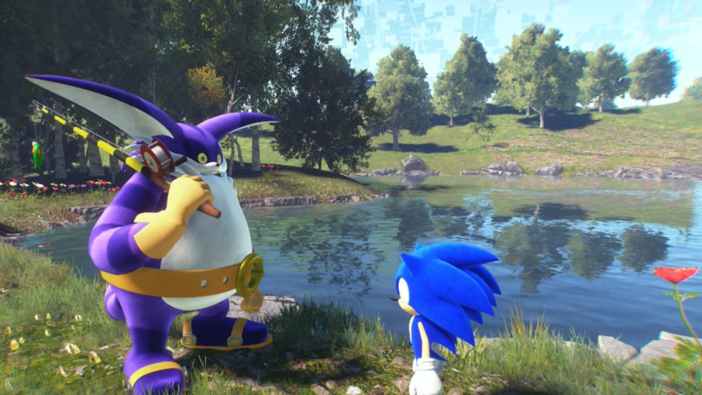 I don’t like Big the Cat. If you were to say that statement to any fan of Sonic the Hedgehog, I don’t think you would get a lot of flack for it. Big the Cat is emblematic of the franchise’s problem with worthless side characters that add virtually nothing to the series. Upon his introduction in Sonic Adventure, his fishing sections grinded the pace of the game to a halt, and he’s been made into a punchline of the franchise for decades. When Sonic Frontiers was going to bring Big the Cat back in a grand fashion, I was prepared for the worst. But for some strange reason, despite my hatred towards the character, his fishing section is actually the most enjoyable thing about the game.

Sonic Frontiers has a lot of problems, but the biggest issue is the “open zones” and how monotonous they are. There are so many miniscule collectibles that, even when you collect a plethora of them at once, it doesn’t feel like you did much of anything. With the character icons, vault keys, gears, and the Koco, none of it feels satisfying to collect. So when I started to collect Purple Coins, I didn’t think much of them, chalking them up as yet another collectible for some nebulous goal the game contrived. But as I made my way to the west of the first island, Kronos Island, I encountered a unique Portal.

Portals take you to the worthless Cyber Space sections that are blink-and-you’ll-miss-them challenges. Usually they require gears to open, but this Portal was different. Looking at the minimap, it was marked with a fish icon, and I knew… he was there. Waiting. Getting ready to fish. There were Purple Coins scattered around the Portal, so I knew they were in relation to this fishing minigame instead of gears. I had a little over two dozen of them. So I steeled myself, went in, and encountered Big the Cat in all of his HD glory. 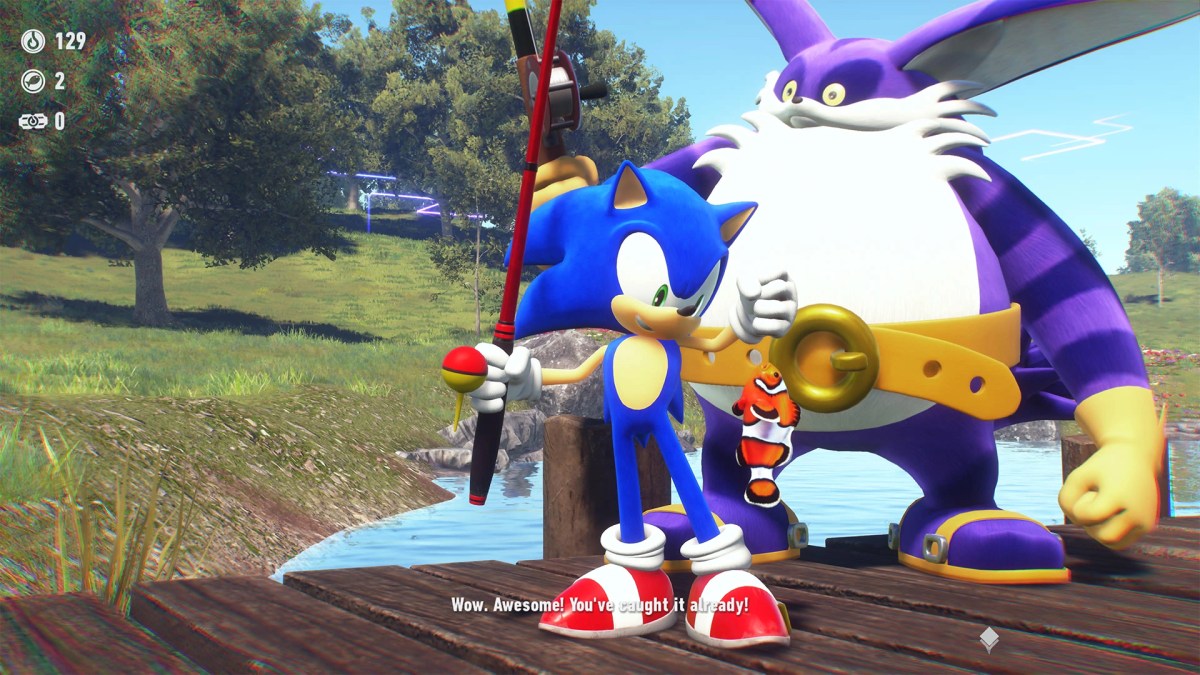 Immediately upon entering, Sonic is confused and has no idea what is even happening. Why is he suddenly in a peaceful field next to a lake? Big the Cat is just standing in front of him, towering over Sonic’s small frame and making small talk. As quickly as Sonic questions why there is an alternate reality dedicated to fishing and Big the Cat is the only inhabitant of it, Sonic then is all about going fishing with Big. I mean, what else are you going to do in a pocket dimension with Big the Cat? But while Sonic was okay with it, I most certainly was not. I don’t know which is worse — the fact that Big rarely moves his mouth when he’s talking, coming across less like a friendly cat and more like a big bass for your wall, or the fact that his voice sounds like the mocking impression I use to spite him.

Regardless, it’s time to fish with Big the Cat in Sonic Frontiers. And you know what? It’s actually pretty fun. Oh, it’s simplistic as all hell. All you have to do is tap the button to cast your rod, tap it again to start reeling in a fish, then tap it again when a white ring gets into a larger red ring. Do that and you get a fish. Depending on the size of your fish, you can get a few points or several points, which can then be redeemed for items like optional audio logs from Dr. Eggman, items that increase your strength or defense, Koco to boost your speed stat, or even limited collectibles for each island to help you with progression.

Instead of wandering aimlessly through the overworld looking for these items, just go to Big and he’ll sell them to you for a super reasonable price. You can even fish for fast travel locations, something that’s only unlocked once you 100% complete an island. There are honest-to-God benefits to spending time with Big the Cat in Sonic Frontiers!

I spend about half an hour fishing with Big. I get tired of him telling me he’ll loan me a rod, but the simplicity of the mechanics makes it oddly calming. I only have to worry about hitting a single button three times, and it requires minimum effort on my part. No more camera snapping to enemies to force me to fight them, or wonky physics when I’m running around, or aimlessly searching for how to get the next character icon. Just sitting with Big the Cat and watching Sonic catch increasingly weird and outlandish things like a goldfish, a tire, a spring, or a barracuda.

I do however run out of Purple Coins eventually, which means I can’t fish with Big anymore. Sadly, I have to leave and go back to Kronos Island. When I return though, I take only a few steps when a Starfall Event occurs. Think of them as the Sonic equivalent of the Blood Moon in The Legend of Zelda: Breath of the Wild. All the enemies are revived, but in Sonic Frontiers this also causes little star bits to fall onto the island. They’re harmless, and they serve as the means to activate a slot machine for extra rewards. The rewards in question are exclusively Purple Coins.

So I run around aimlessly trying to collect as many star bits as I can find, hoping to win big and go back to my new feline friend. The wheel laboriously turns as I keep running. I eventually collect a little over 70 star bits and hear a loud dinging noise. I look up at the slot machine, and it tells me that I won 200 Purple Coins. I’m ecstatic because it means I can go back to fishing. I run on back to Big the Cat, who greets me with his motionless lips, and I settle in for a nice two hours of fishing in Sonic Frontiers. 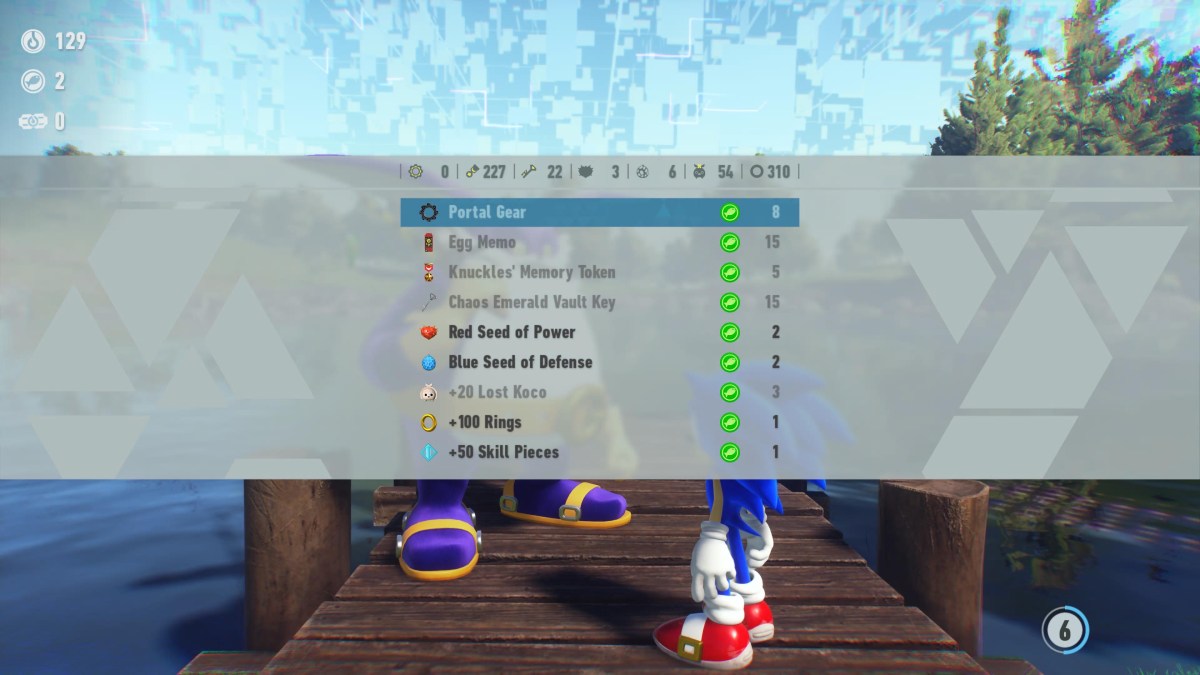 By the time I get done, I acquire all of the Eggman audio logs, a whole array of strength- and defense-increasing items, and an embarrassing amount of Koco. I take my rewards, then head to the nearest upgrade point (thanks to those fast travel scrolls) and blast my skills into a range that they probably shouldn’t be in for this early in the game.

I test out my newfound strength by fighting one of the Guardian minibosses strewn across the island and decimate it in a few seconds. I’m too strong for the enemies around me. When I head over to the next island, I’m pretty certain that I’m going to be overpowered compared to those enemies too. I turned an already mindless game into a joke, but I’m laughing that my decimation of the game’s difficulty is because of Big the Cat. Big the Cat has done more good for me in Sonic Frontiers than in any of his other appearances. He’s the best part of this game because he allowed me to not have to run around finding an absurd amount of collectibles that would make Donkey Kong 64 blush. And for that, I thank him. His sins have been forgiven in my eyes. Learn to abuse his fishing pond and you too will thank him for his angler abilities.