Prior to PAX Prime this year I made the decision, along with the Escapist team, to shift the focus of this column to retro-inspired indie titles. That inspiration could come from a place of art design, level structure, or even a feeling evoked by some sort of nostalgia that cannot be attributed to a single defining feature. The first game I’ll be talking about under this new direction covers all of those points at once.

I’m upset to admit that I did not actually hear about Woah Dave! until I was at PAX this year, despite it being released in October. The game is a combination of all of my favorite things in video games: Retro style art, simple mechanics, difficult gameplay, and probably an LSD trip, making you wonder if your character is really a homicidal maniac on a rampage no one can understand. I love a good antihero… especially when you have no idea whether or not a character actually is an antihero. 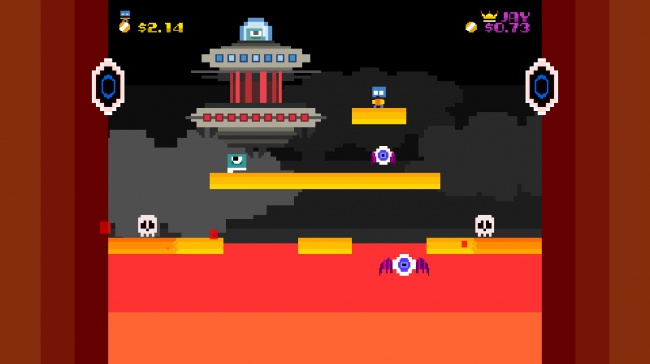 In Woah Dave! the player assumes the role of Dave Lonut, a square little man who makes minimalist pixel art feel right. The level design includes multiple platforms that you can jump between, suspended over lava. Poor squat little Dave is surrounded by eggs that drop from the sky, hatching equally squat little monsters. When the monsters first hatch, they simply walk in a straight line. When they fall into the lava, they evolve into more elaborate monsters – first they become faster, then they begin to jump, and then they turn into eyes with bat wings that fly around Dave with the same sort of dedicated and relentless honing abilities of those damned Ninja Gaiden birds. There are also UFOs that will plague the screen, shooting a ray that takes out platforms and, if you’re really unlucky, even poor Dave. Woah![1]

The point of the game is to defeat as many monsters as possible, and to collect as many coins from these monsters as you can before you die. To defeat enemies, you can throw unhatched eggs, glowing skulls that work like miniature bombs, and Woah Blocks, which clear the screen. Thankfully, Dave is really good at picking things up and throwing them, using this unprecedented ability in order to projectile-launch available weapons at his enemies, who leave coins in their wake after they are killed. How many coins a certain monster will leave depends on how evolved that monster is when you kill them. Letting the screen fill with flying eyeballs is a dangerous move, but one that pays off greatly if you receive a perfectly-timed Woah Block.

The game is simple in appearance, which makes the difficulty that much more apparent. What begins as a one-on-one standoff against a single enemy quickly grows into a single man against a horde of extra-terrestrial monsters… or does it?

The point of Woah Dave! is not to clear a level, it is to accumulate as high a score as possible before you ultimately die. Once Dave dies, the background changes from a lava-floored alien brawling arena to a basic city. All on-screen monsters also change – into normal people. My interpretation of Woah Dave! is that the game’s titular character is in the throes of a drug-induced hallucination, battling “enemy monsters” when, in reality, he’s on a rampage against hallucinations, and possibly even innocent bystanders.

Woah Dave! is very much so an arcade game. I would feel entirely comfortable playing this game with a joystick and exactly two buttons in a dark smoky building with sticky floors and the ching-ing of coins being inserted into a machine. If my saying that isn’t enough, the advertisement on the game’s website features an arcade cabinet with the words “Just like the arcade!”

The spiritual successor to Woah Dave! was playable at PAX Prime this year under the title Space Dave! Where Woah Dave! has some apparent nods to Super Mario Bros., Space Dave! has the influence of Galaga and Space Invaders, offering a new take on the classic fixed shooters that fans of older titles are certainly aware of. Space Dave! is expected (hopefully) at the end of this year.

The development of both titles began with the games’ mastermind Jason Cirillo playing a lot of older video games (lucky) in search of mechanics that he could mix together to form into a cohesive new-old gaming experience. “Both Woah Dave! and Space Dave! were made out of pure love of the simple game design mechanics of classic video games,” says Cirillo. “When we started the MiniVisions label internally here at Choice Provisions, I set out to create some smaller games that we could release between our major “feature” releases. My goal was to just make some games that I wanted for myself, and then hope that other people would be interested.”

Whoa Dave! is the sort of game that will likely have nostalgic gamers excited from the beginning. That could be because the title’s design is drawn heavily from the earliest possible days of video games, or the fact that there is an exclamation point in the title. Either way, I can find myself sinking full days of my life into Woah Dave! and still wanting to go back for more. Whether you grew up score-chasing arcade games in the 80s or are a newer gamer looking for minimalist art and challenging gameplay, Woah Dave! may be a perfect title for you.

[1] Editor’s Note: The editor of this column apologizes for letting this joke stand.
View Forum Comments